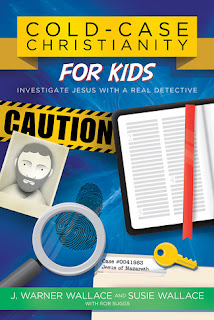 Between the ages of 8 and 12, kids often start to wonder if Christianity is true.
In Cold-Case Christianity for Kids, detective J. Warner Wallace draws readers into the thrill of high-stakes investigation by showing them how to think rather than telling them what to think. In this children’s companion to the bestselling Cold-Case Christianity, detective Wallace gets kids excited about testing witnesses, examining the evidence, and investigating the case for Christianity. Includes author illustrations and links to a website where kids can download activities, fill in case notes, and earn a certificate of merit.
Learn more and purchase a copy.

J. Warner and Susie Wallace have been training young people in the church setting for over a decade. J. Warner is a cold-case homicide detective who has been featured on Dateline, FOX News, Court TV and other crime-related television shows. A former atheist, he is the author of Cold-Case Christianity: God’s Crime Scene and Forensic Faith. He has a master’s degree in theology and is the founder of ColdCaseChristianity.com. Susie has a master’s degree in speech pathology and co-writes (and edits) all the kids books in this series. J. Warner and Susie have four children and live in southern California.

What a great little book for children between the ages of 8 and 12, and anyone who likes a little mystery.
“Detective Wallace gets kids excited about testing witnesses, examining the evidence, and investigating the case for Christianity.” How Fun, actually for everyone, as you use this as a teaching tool, and there is another great tool to use along with this book, http://www.coldcasechristianityforkid....
First we need to joint the academy, and then we need this neat book to follow and read along.
Introduction: Wanted A Few Good Detectives
Chapter One: Don’t be a “Know It All”
Chapter Two: Learn How to Infer
Chapter Three: Think Circumstantially
Chapter Four: Test You Witnesses
Chapter Five: Respect The Chains Of Custody
Chapter Six: Hang On To Every Word
Chapter Seven: Separate Artifacts from Evidence
Chapter Eight: Resist Conspiracy Theories
Postscript: Belief That or Belief In
A book and website to inspire you and your children to seek out the truth, they are about to enter the Detective Cadet Academy, and about to be trained up, and learn how to investigate the case for Jesus. What an exciting and Christian challenge for these young people, or for you for that matter.
I received this book through Lit Fuse Publicity Book Tours, and was not required to give a positive review.