The Wish by Beverly Lewis 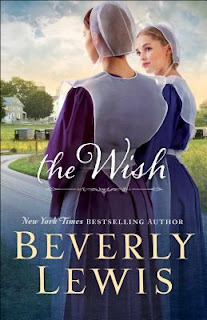 A Compelling Story of Friendship from the Top Author in Amish Fiction
Leona Speicher got the "sister" she'd always dreamed of the day Gloria Gingerich and her family moved to Lancaster County Amish farmland. The Arkansas newcomers seem to be everything a devout Plain family should be, and Leona can't help comparing Gloria's engaging young parents to her own.
Leona's cousin shows a romantic interest in Gloria around the same time as Gloria's older brother expresses his fondness for Leona--it seems likely the two young women will marry into each other's families, remaining close friends for life. Thus, Leona is shocked when the Gingeriches suddenly pack up and disappear after being expelled from the church for reasons no one will discuss. Despite Leona's pleas, Gloria goes with them, leaving more than one broken heart behind.
When Gloria unexpectedly contacts Leona after a silence of several years, Leona makes up her mind to persuade her friend to return to Lancaster County and the Amish ways. Leona's new beau, the deacon's son, is alarmed when Leona decides to go after Gloria. Will Leona's dearest wish lead to her own undoing?

Beverly Marie Jones (Lewis) was born in the heart of Amish country—Lancaster, Pennsylvania. At the tender age of nine, she began writing short stories and poetry. Prior to that, she made up lyrics to the "little fingers" piano pieces she learned, at the age of five.
"My mother saved everything I wrote, even the stories I dreamed up during my grade school years," Beverly says. One such tale is semi-autobiographical, about a young girl whose parents can no longer afford to give her piano lessons. The manuscript was 77 pages long and titled "She Shall Have Music," penned under the shade of a lone willow tree. "Reading, writing, and playing piano have been top three on my list of favorite things," she says.
Booksellers across the country, and around the world, have spread the word of Beverly's tender tales of Plain country life. A clerk in a Virginia bookstore wrote, "Beverly's books have a compelling freshness and spark. You just don't run across writing like that every day. I hope she'll keep writing stories about the Plain people for a long, long time."
A member of the National League of American Pen Women, as well as a Distinguished Alumnus of Evangel University, Lewis has written over 80 books for children, youth, and adults, many of them award-winning. She and her husband, David, make their home in Colorado, where they enjoy hiking, biking, and spending time with their family. They are also avid musicians and fiction "book worms."

A story of a young woman's lust for the other side of the fence, doesn’t it always look greener? Leona has a dear friend in Gloria, and as a young girl she wishes she could be a part of her family, everything about them is so much better than hers.
When abruptly without so much as a goodbye they are gone, and she doesn’t hear from her best friend/sister for over three years, a lifetime, and a grieving time for such a loss. When Gloria finally contacts her, she begs Leona to come to her, and we begin to wonder what is going to happen to our girl? Will she decide she likes what has happened to this family that was so dear to her, will she end up being English?
When Gloria comes back to Lancaster with her, will Leona’s family let in the door? She is no longer Amish and is driving a car, and carrying a cell phone, or will she look to return to her roots. All of the answers are here and more, a delightful read that you won’t want to put down and will be page turning late into the wee hours of the morning.
I received this book through Net Galley and Bethany House Publishing, and was not required to give a positive review.