King of the Friend Zone by Sheralyn Pratt 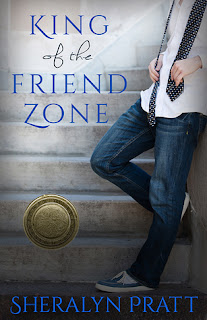 From the Power of the Matchmaker series:

Esme Taylor has an amazing fiancé, a lifelong best friend, and a problem.

The problem stems from the fact that her best friend is named Hunter and, well. . .he’s kind of (totally) hot. It’s hate at first sight when her fiancé, Jon, and Hunter meet. Jon’s convinced that Hunter is in love with Esme, and that Hunter must be out of the picture if their upcoming marriage is to succeed.

The truth is, Jon’s not that far off. Hunter is in love with his best friend and always has been. What Jon has wrong, however, is that Hunter never had any plans of ruining Esme’s happily ever after. Hunter wants what’s best for Esme, even if that’s not him.

When Jon pushes hard to end Esme and Hunter’s friendship, opposition comes from the most unlikely of places. It’s an eccentric lady with a cookie cart who suggests a different solution to Esme’s problem: Hunter and Esme should give each other a chance.

They’ve both thought of the possibility over the years—of course they have. But with a ring already on Esme’s finger and a heap of hurt feelings and broken trust in the mix, there hasn’t been a worse time to explore the depths of their feelings for each other.

Both Esme and Hunter think it’s time to move on and leave childhood crushes in the past. The question is: Can one woman and the taste of one cookie change their minds?

Some describe Sheralyn as a girl who's been around the block and worked at every shop. This isn't far from the truth. Writing is what she loves most, however. There's a magical power in stepping into new perspectives time and again, and seeing the world through different eyes. Few things increase empathy more than walking in another's shoes for 100,000 words or so. At least that seems to be the trend so far.
Some random things to know about Sheralyn: * She's a wanderer (geographically) * She can write a novel, but doesn't have the attention span for one page in a journal * She vehemently disagrees with Stephen King's stance that authors should not watch TV * She is pretty much incapable of sleeping before midnight.

This story is set in San Francisco and we are with Esme and her favorite city park, and perfect Jon knowing this, uses this background to ask for her hand in marriage. Jon is every girls dream, tall, dark and handsome, and also a very rich doctor.
Esme feels she has arrived and found just what she has been looking for, but when Jon starts changing his spots, can she adapt to what he wants.
Hunter and Emse were brought up together, mom’s are best friends and spent a lot of time together, and are still doing so. Hunter is tall, blond and also handsome, but Esme thinks of him as another brother, and Jon thinks of him as a threat, is he right, or are they like siblings.
As wedding looms will the two you are rooting for end up together, maybe, and again maybe not? Who is right in all of this, Jon can see what is happening, and is he right or just wanting to make sure he keeps Esme. We also see one of these two becoming abusive, one wants to maintain control and not let go.
This story will make you think, keep page turning, and wanting more.
I received this book through Inspired Kathy, and was not required to give a positive review.