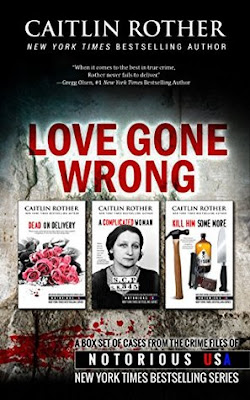 Welcome to Florida, the Sunshine state with a darker side than most. The mecca for wealthy retirees to enjoy their younger girlfriends, yachts and marble-floored mansions, where recreational drugs, sex and booze flow like the warm water that hugs the coast. Where teenage girls and their boyfriends kill their parents in the name of love, and women shoot their boyfriends then claim self-defense. New York Times bestselling crime authors Caitlin Rother and Gregg Olsen join to release this compilation of murder cases from the vacation destination that is home to Disney World and miles of beaches, yet also has more killers on its death row than any other state but California. This compilation pairs two sets of cases with similar circumstances but very different outcomes. In the first story, a former flight attendant murders her multimillionaire boyfriend of eighteen years, using a gun, a knife, a hammer (and possibly poisoned his gin as well), claiming he was abusive for years and put a loaded gun to her head. In the second story, a woman with a history of violent, drug-addicted boyfriends kills her latest lover after only a few weeks together, alleging that he forced a gun into her mouth in a drug-induced rage. In the third story, a 15-year-old girl falls in love and wants to have a baby with a boyfriend who is four years older. Her mother, who wants to end the relationship, ends up dead after being stabbed, choked, and injected with a syringe loaded with bleach. Finally, a 16-year-old girl and her 20-year-old boyfriend conspire to fatally bludgeon her disapproving father with a baseball bat.

Welcome to Georgia, where the all-mighty dollar trumps mercy and lawfulness on an all-too-regular basis. Where hit men can be hired for small sums and lovers can be manipulated into killing innocent people, all out of greed. In the first story, the socialite wife of a multimillionaire is fatally shot by a flower delivery man on the day of a key divorce hearing. After sending authorities on a global fugitive hunt, the man responsible is brought back to face justice twenty years later, wearing only one sandal on his gout-ridden feet. In the second, a crooked businessman trying to go straight is shot in his driveway by a hit man wearing a ski mask and camouflage gear—one in a nationwide series of contract-for-hire murders, advertised in the classified-ad pages of Soldier of Fortune magazine. And finally, a Gulf War veteran and father of three is kidnapped, beaten and stabbed by the lover of his on-and-off-again wife, who wants to collect life insurance benefits and pay off her house. The lover makes a deal for a life sentence and a chance at parole, while the wife gets the death penalty. She becomes the second woman ever to be executed in Georgia, even after the Pope, other faith-based advocates and two of her children fight for her clemency, citing her dramatic repentance and rehabilitation through religion.

And finally, in South Carolina, where racial strife and righteous, heavily-armed indignation leads to murder. Rother brings listeners a compilation of crime stories from this former Confederate state: the first woman in South Carolina to go to the electric chair after a vengeful feud over a dead calf turned fatal; the state's most prolific serial killer who managed to kill a fellow prisoner while on death row; and the young white man accused of trying to incite a race war by fatally shooting nine African-Americans during Bible study in a historic church.

Compelling read and three books providing in this set, and once you finish one you will be quickly on to the next. What a great buy, and makes a wonderful read for those who love non-fiction.
Kill Him Some More are true stories that make it even worse, you can’t imagine how these could happen.
If you were in your fifties and your beauty was fading would you kill your elderly boyfriend, no he never married you, now he wants younger woman, so she showed him. Then we have people on drugs, these people are so damaged by what they are doing to their bodies, and now they are killing one another. Justice, but who and what do you believe?
The tragedy are the young teenagers whom the parents have literally lost control of them completely, they do as they please, and may have you believing they are following the rules, but no, they are now facing murder charges. Follow these trials to the end, and yet where are the answers to preventing these horrible acts?
Caitlin Rother presents the facts here, you don’t have to do the digging, she has it all and it is not pretty, and how these people die is horrible.
A Complicated Woman: South Carolina, Notorious USA I didn’t know that the first woman who went to the electric chair was from South Carolina, nor that it evolved over the death of a calf. The cases in this book involve a famous Senator Strom Thurmond, and a serial killer Pee Wee Gaskin, who is even able to kill while in prison.
There is so little value in human life, and the last case tells about a resent man who killed the people who opened their church to him, and in the end they lived their faith and forgave him.
Such needless killings, and it seems there are different reasons, but mostly hate. So very sad.

Dead on Delivery has the State of Georgia in its mind, and the crimes have home in the Peach State. We find greed rearing its ugly head, and in one a wife planning the murder of her husband for a non-existent insurance policy, a war veteran who spends his day helping a friend.
I never knew, even if it doesn’t exist now, that there was a magazine people advertised in to offer their services as a sniper, murder for hire? We find this service being used, we also see a lot of missteps but in the end, it is all laid out to greed, and Caitlin Rother has brought all of this story to us, we don’t need to hunt through pages and pages of documents. I find it hard to believe that these things are happening, my head in the sand, yes.
Then we also have Mr. Wealthy, he doesn’t want to give his soon to ex-wife a cent, and so we do away with her. We watch how justice has a long time coming, but in the end we sometimes wonder if it has been served.
Compelling page turning read, and you will wonder if the death sentence should be used, while I agree with it, it is controversial.
I received this book from the Author, and was not required to give a positive review.