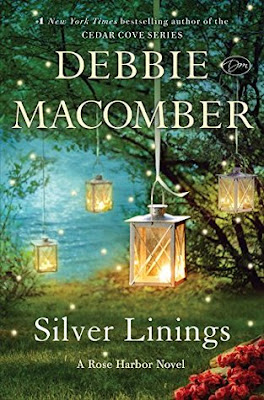 Set in Cedar Cove’s charming Rose Harbor Inn, Debbie Macomber’s captivating new novel follows innkeeper Jo Marie and two new guests as they seek healing and comfort, revealing that every cloud has a silver lining, even when it seems difficult to find.

Since opening the Rose Harbor Inn, Jo Marie Rose has met fascinating people from all walks of life, but none have piqued her interest quite like handyman Mark Taylor. Jo Marie and Mark are good friends—and are becoming something more—yet he still won’t reveal anything about his past. When Mark tells her that he’s moving out of town, Jo Marie is baffled. Just when she is starting to open herself up again to love, she feels once more that she is losing the man she cares about. As she grapples with Mark’s decision and tries to convince him to stay, she welcomes two visitors also seeking their own answers.

Best friends Kellie Crenshaw and Katie Gilroy have returned to Cedar Cove for their ten-year high school reunion, looking to face down old hurts and find a sense of closure. Kellie, known as Coco, wants to finally confront the boy who callously broke her heart. Katie, however, wishes to reconnect with her old boyfriend, James—the man she still loves and the one who got away. As Katie hopes for a second chance, Coco discovers that people can change—and both look to the exciting possibilities ahead.

Heartwarming and uplifting, Silver Linings is a beautiful novel of letting go of the past and embracing the unexpected.

Debbie Macomber is a #1 New York Times bestselling author and one of today’s most popular writers with more than 170 million copies of her books in print worldwide. In her novels, Macomber brings to life compelling relationships that embrace family and enduring friendships, uplifting her readers with stories of connection and hope. Macomber's novels have spent over 750 weeks on the New York Times bestseller list. Eight of these novels hit the number one spot.
In 2015, Macomber's all-new hardcover publications will include Last One Home (March), Silver Linings (August) and Dashing Through The Snow (October) and paperback editions of Blossom Street Brides (March) and her Christmas novel, Mr. Miracle (October).
In addition to fiction Macomber has also published two bestselling cookbooks; numerous inspirational and nonfiction works; and two acclaimed children’s books.
Macomber's beloved and bestselling Cedar Cove Series became Hallmark Channel’s first dramatic scripted television series, Debbie Macomber's Cedar Cove, which was ranked as the top program on cable when it debuted in summer 2013. Hallmark is now filming a second season of Debbie Macomber's Cedar Cove which will premiere this July 19.  In addition, Macomber’s upcoming Christmas novel, Mr. Miracle, will be made into an original movie premiering on Hallmark Channel in fall 2014. Previously, Hallmark Channel has produced three successful Christmas movies based on Macomber's bestselling Christmas novels, Mrs. Miracle, Call Me Mrs. Miracle and Trading Christmas.
Macomber owns her own tea room, Victorian Rose Tea Room & yarn store, A Good Yarn, named after the shop featured in her popular Blossom Street novels. She and her husband, Wayne, serve on the Guideposts National Advisory Cabinet, and she is World Vision’s international spokesperson for their Knit for Kids charity initiative.
A devoted grandmother, Debbie and her husband Wayne live in Port Orchard, Washington (the town on which her Cedar Cove novels are based) and winter in Florida.

Oh how I love being back in Cedar Cover, and Debbie Macomber drew me in once again, and the only bad part was the books ending, when I wanted more. When I go to Jo Marie’s Rose Harbor Inn, I unpack my bag and never want to leave, and this book is no exception.
There are three separate romances going on here, one for Jo Marie and Mark the handyman, and two for guests visiting for their ten-year high school reunion. Mark declares his love for Jo Marie, and promptly moves away, what? The guests are Coco [Kellie] and Katie, one gave up her love because she loved him and the other had a disaster happen to her when she accepted a date to homecoming dance.
All three have hugs, kisses and tears involved, but you won’t see what is going to happen to them until the final page. Like the previous books we spend time in Cedar Cove, at the high school, restaurants and shops, should know my way around here by now. Am waiting, and not patiently for another book in this series, and don’t think patience is one of my virtues. Pick this one up, it is a page-turner, and you won’t be disappointed!
I won this book through Library Thing, and was not required to give a positive review.