I Am A Reader Not A Writer Presents: The Duality Bridge by Susan Kaye Quinn Blog Tour 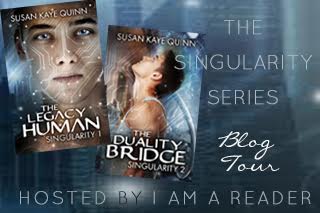 The Legacy Human by Susan Kay Quinn What would you give to live forever? Seventeen-year-old Elijah Brighton wants to become an ascender—a post-Singularity human/machine hybrid—after all, they’re smarter, more enlightened, more compassionate, and above all, achingly beautiful. But Eli is a legacy human, preserved and cherished for his unaltered genetic code, just like the rainforest he paints. When a fugue state possesses him and creates great art, Eli miraculously lands a sponsor for the creative Olympics. If he could just master the fugue, he could take the gold and win the right to ascend, bringing everything he’s yearned for within reach… including his beautiful ascender patron. But once Eli arrives at the Games, he finds the ascenders are playing games of their own. Everything he knows about the ascenders and the legacies they keep starts to unravel… until he’s running for his life and wondering who he truly is. The Legacy Human is the first in Susan Kaye Quinn’s new young adult science fiction series that explores the intersection of mind, body, and soul in a post-Singularity world… and how technology will challenge us to remember what it means to be human.

Praise for The Legacy Human “This book is Hunger Games (without the violence or controversy) meets Divergent.” “This story is so intense I felt I couldn’t get a proper breath.” “Science fiction with philosophical depth!”

The Duality Bridge What does it mean to be human? Elijah Brighton is the face of the Human Resistance Movement. He’s the Olympic-level painter who refused an offer of immortality from the ascenders—the human/machine hybrids who run the world—in solidarity with the legacy humans who will never get a chance to live forever. Too bad it’s all a complicated web of lies. Worse, Eli’s not even entirely human. Few know about the ascenders’ genetic experiments that left him… different. Fewer know about the unearthly fugue state that creates his transcendent art—as well as a bridge that lets him speak to the dead. But the Resistance is the one place he can hide from the ascender who knows everything the fugue can do. Because if Marcus finds him, he’ll either use Eli for his own nefarious purposes… or destroy him once and for all. The Duality Bridge is the second book in the Singularity series and the sequel to The Legacy Human. This thrilling new young adult science fiction series explores the intersection of mind, body, and soul in a post-Singularity world.

Author Susan Kay Quinn Susan Kaye Quinn is the author of the Singularity Series, the bestselling Mindjack Trilogy, and the Debt Collector serial, as well as other speculative fiction novels and short stories. Her work has appeared in the Synchronic anthology, the Telepath Chronicles, the AI Chronicles, and has been optioned for Virtual Reality by Immersive Entertainment. Former rocket scientist, now she invents mind powers, dabbles in steampunk, and dreams of the Singularity. Mostly she sits around in her PJs in awe that she gets to write full time.

Delphina is watching me from outside the holo matrix… along with Kamali, whose wide brown eyes hold silent judgment for the things she thinks I’ve done. Forbidden things, like being a love toy for my ex-patron and current-rebel-ascender, Lenora. Who happens to be standing right next to her. While Kamali’s graceful dancer body is hidden under the black military garb of the resistance, Lenora’s perfect bodyform is barely covered in scintillating ascender-tech fabric. The thing is, I’ve never so much as kissed Lenora. Except in my dreams, which really shouldn’t count against me. Any seventeen-year-old guy would have those kinds of thoughts. But the truth is Kamali’s not wrong to judge me.
My feelings for Lenora have always been… complicated.

$25 Blog Tour Giveaway $25 Amazon eGift Card or Paypal Cash Ends 9/6/15 Open only to those who can legally enter, receive and use an Amazon.com eGift Card or Paypal Cash. Winning Entry will be verified prior to prize being awarded. No purchase necessary. You must be 18 or older to enter or have your parent enter for you. The winner will be chosen by rafflecopter and announced here as well as emailed and will have 48 hours to respond or a new winner will be chosen. This giveaway is in no way associated with Facebook, Twitter, Rafflecopter or any other entity unless otherwise specified. The number of eligible entries received determines the odds of winning. Giveaway was organized by Kathy from I Am A Reader and sponsored by the author. VOID WHERE PROHIBITED BY LAW.