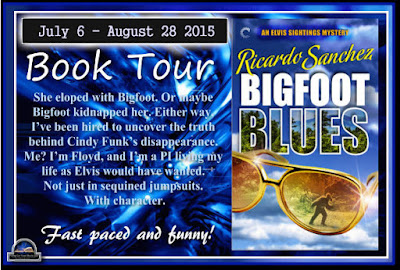 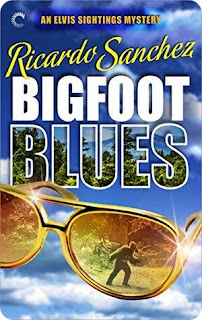 She eloped with Bigfoot. Or maybe Bigfoot kidnapped her. Either way, I've been hired to uncover the truth behind Cindy Funk's disappearance. Me? I'm Floyd, and I'm a PI living my life as Elvis would have wanted. Not just in sequined jumpsuits. With character.
Cindy's trail leads me to River City, Oregon—aka the Mythical Creature Capital of the World—where I catch Case #2. This one from an eccentric billionaire who's lost a priceless piece of "art." Enter one dead body and I end up deputized to solve Case #3, tracking down a man-eating mountain lion. Or maybe it's a chupacabra. Or just an ordinary murderer. Hard to say.
I've handled my fair share of crazy, but River City's secrets have me spooked. With an influx of tourists arriving for the town's annual Elvis tribute contest—what are the chances?—I've got to save the girl, solve the rich guy's problem and leash that chupacabra before a second body is discovered. It might just be mine.
Read more about Floyd's adventures in Elvis Sightings, available now! 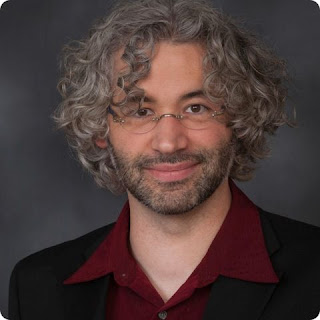 Ricardo has written several books for DC Comics, including Batman: Legends of the Dark Knight, Teen Titans Go! and Resident Evil among many others. His original project, A Hero’s Death, was a successful Kickstarter released in May, 2015.

In addition to writing, Ricardo is an Emmy award winning video and animation producer. When he’s not writing, Ricardo maintains a vintage toy blog, drives 70's muscle cars, and shops year round for Halloween decorations for his home in California.
For More Information

It was ten past two on a Wednesday and I was sitting behind my desk in the office I share with Franklin, a chiropractor. His wife had sent me looking for him almost four years ago, but she was such a harridan that once I’d found him, I couldn’t bring myself to turn over his location. He’d let me use his place as an office, rent-free, ever since.
I checked my watch again.
Wanda was flying back to Kresge today. I resented being dragged away from her, even for just an hour, but the man on the phone had insisted. It had been more than a month since my last case, so while Wanda packed, I came into the office to meet Peter Funk. And he was late.
The clock hit 2:15. I was about to leave when a very lost-looking man in his fifties opened the door.
“You must be Floyd,” he said, taking off his well-worn Caterpillar cap. His bald head had the baked look of someone who spent a lot of time under the hot Idaho sun. “Your Elvis outfit kinda gives it away,” he added.
“You’re Mr. Funk?”
He smiled weakly and bobbed his head up and down in the affirmative.
I pointed him to a seat and sat back down at my desk.
“So what can I do for you?” I asked.
Funk looked down at the cap in his hands and worried at a loose thread with his callused fingers.
“I need you to find my daughter,” he said and looked up at me. “You’ve got to help me. I don’t know who else to turn to.”
“I’d be happy to help, Mr. Funk, but with missing children you’re much better off going to the police.”
Funk stood up and slapped his hat against his thigh. A small cloud of dirt erupted from the dull blue denim of his pants.
“Oh, the cops won’t help me. Cindy’s eighteen. They said they can’t go looking for her if she’s just run off,” he said. “Besides…”
“Besides what, Mr. Funk?”
He took his seat again before finally blurting out, “She ran off to elope with Bigfoot.”
I would have laughed if Funk hadn’t looked so worried.
“Bigfoot?” I said. “That’s a nickname?”
“No, sir.”
Funk pulled a postcard out of his jeans pocket and handed it to me.
On one side was a teenage boy holding up a plaster casting of a giant footprint nearly three feet long. Across the bottom it read “River City—The Home of Bigfoot.” I turned it over. The postmark was three weeks ago in River City, Oregon. The note on the card read:

Dear Daddy,
I’ve fallen in love with Bigfoot and we’ve decided to elope. I won’t be coming back to Pocatello. I’ll write again soon.
Cindy

She’d put a little heart in place of the dot above the is in both Bigfoot and Cindy.
River City… The name was familiar, but I couldn’t quite place it.
“My girl, she’s a willful one she is, but Cindy’s never lied to me. Not once,” Funk said. “If Cindy says she’s eloped with Bigfoot, that’s exactly what she’s done.”
Why did I get all the weirdos? Was it the suit? Or the Lifestyle Elvis thing? Or maybe this was some sort of elaborate practical joke. I let out a low sigh.
A case is a case, I told myself. And this one was just too absurd to be someone shining me on. 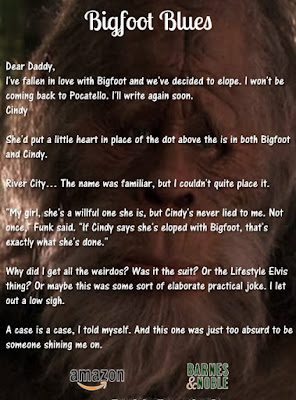