To Win Her Favor (Belle Meade Plantation, #2) by Tamera Alexander 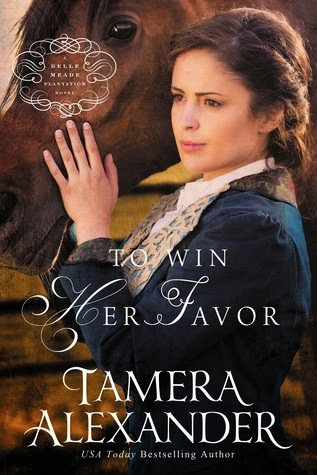 A gifted rider in a world where ladies never race, Maggie Linden is determined that her horse will become a champion. But the one man who can help her has vowed to stay away from thoroughbred racing for good.

An Irish-born son far from home, Cullen McGrath left a once prosperous life in England because of a horse racing scandal that nearly ruined him. He’s come to Nashville for a fresh start, hoping to buy land and start a farm, all while determined to stay as far away from thoroughbred racing as possible. But starting over proves harder than he’d wagered, especially when Maggie Linden’s father makes him an offer he shouldn’t accept yet cannot possibly refuse.

Maggie is certain that her mare, Bourbon Belle, can take the top purse in the annual Drayton Stakes at Nashville’s racetrack––the richest race run in America. Maggie only needs the chance to prove it. To give her that chance, and to save Linden Downs from being sold to the highest bidder, Maggie’s father––aging, yet wily as ever––makes a barter. His agreement includes one tiny, troublesome detail––Maggie must marry a man she’s never met. A man she never would have chosen for herself.

Cullen and Maggie need each other in order to achieve their dreams. But their stubborn, wounded hearts––and the escalating violence from a "secret society" responsible for lynchings and midnight raids––may prove too much for even two determined souls.

Tamera Alexander is a bestselling novelist whose works have been awarded or nominated for numerous honors, including the Christy Award, the RITA Award, and the Carol Award. After seventeen years in Colorado, Tamera and her husband have returned to their native South and live in Tennessee, where they enjoy spending time with their two grown children.

Celebrate the release of To Win Her Favor with a Kindle Fire and book giveaway!

Enter today by clicking the icon below. But hurry, the giveaway ends on May 10th. Winner will be announced May 11th on Tamera’s blog. Plus stay tuned for more opportunities to win after May 11 with a special Pinterest contest—more details coming soon!

Mail order bride, nope, mail order groom, not quite, more like 1860’s Nashville TN and a father picking someone off the highway as a prospective son-in-law. This time period is just after the Civil War, we are in the South, and so many families are hurting. Now the carpetbaggers are taking over, or the less than scruples individuals who take from those who are hurting and looing everything, besides their loved ones.
Cullen McGrath is looking for land; he wants to fulfill his deceased wives wish. Everywhere he turns he hits prejudice, former slaves and Irishmen are lumped together as being unreliable and lazy. No one wants to sell anything to him, and he is told to leave town.
Now he is offered a picturesque piece of property, and all that goes with it, and all he has to do is marry Mr. Linden’s daughter. Maggie knows she has to marry this man she has never met in order to save Linden Downs.
Will Maggie go through with marrying this man, and an Irishman at that? Will she be able to race her beloved horse, or will the new owner take away her dreams? It all lies in her hands, which way her decision goes.
Come along with for a different look at the post Civil War era, and how so many lives were affected. I didn’t want the book to end, and there are some unanswered questions here, and I am happy that there is another book coming. Yeah!
I received this book through the Litfuse Book Bloggers book tour, and was not required to give a positive review.
at April 29, 2015