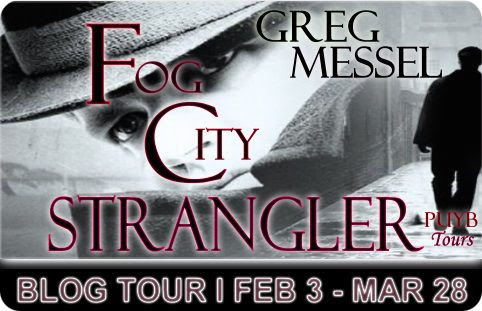 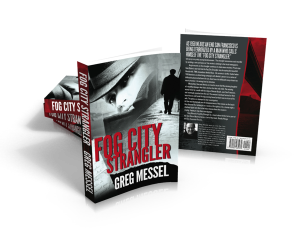 Title: Fog City Strangler
Author: Greg Messel
Publisher: Sunbreaks Publishing
Pages: 453
Language: English
Genre: Mystery/Romance
Format: Paperback, Kindle
As 1958 nears an end San Francisco is being terrorized by a man who calls himself the “Fog City Strangler,” who preys on pretty young blonde women.  The strangler announces each murder by sending a note and piece of cloth from the victim’s dresses to the local newspapers.
Private eye Sam Slater is worried that the Fog City Strangler may be eyeing his beautiful blonde wife, stewardess Amelia Ryan. Sam’s angst mounts as the strangler continues to claim more victims. His anxiety is further fueled when TWA launches an advertising campaign with Amelia’s picture on a series of billboards plastered all over the city. Sam fears the billboards may attract too much attention–the wrong kind of attention.
Meanwhile, Sam and Amelia are hired to try to find the missing daughter of a wealthy dowager who fears she has lost her only child. The missing woman went for a walk with her dog on Stinson Beach, near San Francisco, and seemingly vanished into thin air. The woman’s husband arrived at their beach house and found the dog running loose but there was no trace of his wife. The police are stumped in their investigation.
As Sam and Amelia look into the disappearance of the woman on the beach they discover that nothing is as it seems at first glance. On a stormy night a shadowy figure sets fire to the beach house where the couple is staying–hoping to stop their investigation.
Fog City Strangler is a stand-alone thriller but is part of the Sam Slater Mystery Series–Last of the Seals, Deadly Plunge and San Francisco Secrets. Greg Messel grew up in the San Francisco Bay Area and now lives in Edmonds, Washington on the Puget Sound with his wife, Carol.  Fog City Strangler is his seventh novel and is the fourth in a new series of Sam Slater mystery novels. Greg has lived in Oregon, Washington, California, Wyoming and Utah and has always loved writing, including stints as a reporter, columnist and news editor for a daily newspaper.
Follow news about Messel’s writings and books at www.gregmessel.com.

Greg Messel is giving away a 3 book set of his Sam Slater Mystery Series (Last of the Seals, Deadly Plunge and San Francisco Secrets AND a $25 Amazon Gift Card!