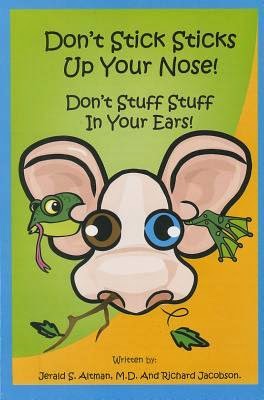 There's no getting around it. Kids are curious and kids will be kids. But this can lead to putting themselves at risk for serious injury- not to mention costly healthcare expenses for Mom and Dad. After 15 years of practice, Dr. Jerald Altman is never amazed by what kids will put into their nose and ears. Through fun illustrations and clever rhyming schemes, Don't Stick Sticks Up Your Nose! Don't Stuff Stuff In Your Ears! is the perfect way to teach kids not to put dangerous objects where they don't belong.

Jerald Altman is an Otolaryngologist-Head and Neck Surgeon (ENT Doctor). After publishing many peer-reviewed journal articles, he recognized the need for a children’s book dealing with a common problem in his practice. He was recognized as a Phoenix Top Doc in 2010, 2011, 2012 & 2013.
He is a general Otolaryngologist and he loves taking care of children’s ear, nose and throat issues. Accordingly, the idea for this book came from his pediatric patients and their incessant need to put things where they shouldn’t go!
He is married, has 3 children and lives in a suburb of Phoenix. He enjoys wood turning as a hobby and climbs Camelback Mountain regularly. While he enjoyed the experience of co-authoring his first children’s book with Richard Jacobson, he has no idea what a topiary or tables cape is!

Richard Jacobson studied architecture at Yale University and has spent most of his adult life designing interiors, landscapes, tables capes, clothing… and just about anything else that can be fashioned in a creative way. He enjoys training dogs, birds and topiaries in his spare time. He lives in Phoenix, Arizona but since he travels extensively to play in duplicate bridge tournaments, he climbs considerably fewer mountains than his co-author.
He once collaborated with his co-author’s (then) seven-year old daughter on a painting for her newly-decorated bedroom. Asked by her mother how she had enjoyed the experience, she replied bluntly, “He’s a little controlling.” Years later, her accurate judgment tempered the rhyming verses he used to gently guide young children’s behavior.

Don’t Stick Sticks Up Your Nose, Don’t Stuff Stuff In Your Ears, is really a delightful help book for parents of toddlers. The pictures are enticing for youngsters, and the rhyming words draw their attention.
We all know how little ones like to put things, where they don’t belong. A help book for pointing out to little curious ones that it is not ok. They can chew on the cardboard book as you read along, and eye-popping drawings show what can go wrong.
For parents now there is a book that might help with that frustration and rushed visits to the doctor or emergency room. The book is co-authored by a physician, and I’ll bet he has surely run into these problems.
When I shared this with our six year old, he was delighted with the rhyming and the pictures of what these kids do with stuff. He would never have done any of this, oh no, not him. Then I remind him of things. Oh No!! Guess he doesn’t, or chooses not, to remember.
This is one cute, eye drawing, sturdy book, that you really should add to your child’s library.

I received this book from New Shelves Distribution, and was not required to give a positive review.