About the Author:
Gerald Rennie, currently working in Port Coquitlam in beer distribution, graduated High School in 1981, has a life long interest in the subject of rats. Previously published a short auto biography about experiences with them in The Rat Worshiper. Lives alone with his five rats in Maple Ridge, British Columbia.
About the Book:
Title: The Rat Chronicles
Genre: Science Fiction 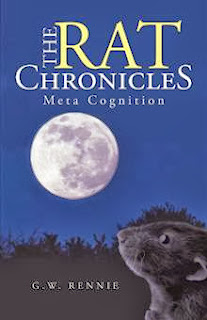 An alien race known as the Xzebuliens that exists in an alternate universe has developed the technology to create a rift in our own, that appears on the blind side of the moon. They send asteroids through the rift and deflect them to land on all the major continents of Earth, containing a virus engineered to wipe out the human race, so they can leave their dying world behind after we are gone. There will however, be limitations to the virus, like how far and fast it spreads from the epicenters of the land masses that they strike making our environment toxic to humans, but not to most any other forms of life on the planet. The virus, also designed to turn the environment against humans, including the plant and animal life.

What the aliens did not count on is that the rats of Earth are affected by the virus in a way that mutates them, rendering the virus inert so as not to be dangerous to us through them, but giving them an ability to become telepathic with people through their Meta cognitive abilities that they share with human beings which is evidently lacking in other animal species. They eventually become our allies using their superior senses and intellect that work through us because of their mutated telepathic abilities and the Meta cognitive powers that both our species have in common in thwarting the alien attempts to invade.

An ancient secret the rats discover in an otherworldly alien AI database that they reveal to us through their enhanced mental abilities is so shocking it will change the way people look at rats and our world forever. The human race becomes subservient to the rats because of their accidental alien viral metamorphosis as we depend on each other for the survival of both our species….

a Rafflecopter giveaway
at December 16, 2013