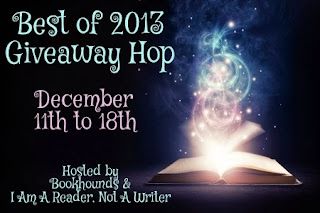 Best of 2013 Giveaway Hop
Hosted by I Am A Reader, Not A Writer & Bookhounds
December 11th to 18th

I am giving away one of my favorite books from 2013. I've read over 200 books this year and am giving you a choice of one of my favorites. Please fill out the rafflecopter! The winner will received the book through Amazon. So if Amazon ships to your country, it is open Internationally.

Mrs Lincoln's Dressmaker, by Jennifer Chiaverini
In Mrs. Lincoln’s Dressmaker, novelist Jennifer Chiaverini presents a stunning account of the friendship that blossomed between Mary Todd Lincoln and her seamstress, Elizabeth “Lizzie” Keckley, a former slave who gained her professional reputation in Washington, D.C. by outfitting the city’s elite. Keckley made history by sewing for First Lady Mary Todd Lincoln within the White House, a trusted witness to many private moments between the President and his wife, two of the most compelling figures in American history.

In March 1861, Mrs. Lincoln chose Keckley from among a number of applicants to be her personal “modiste,” responsible not only for creating the First Lady’s gowns, but also for dressing Mrs. Lincoln in the beautiful attire Keckley had fashioned. The relationship between the two women quickly evolved, as Keckley was drawn into the intimate life of the Lincoln family, supporting Mary Todd Lincoln in the loss of first her son, and then her husband to the assassination that stunned the nation and the world.

Keckley saved scraps from the dozens of gowns she made for Mrs. Lincoln, eventually piecing together a tribute known as the Mary Todd Lincoln Quilt. She also saved memories, which she fashioned into a book, Behind the Scenes: Thirty Years a Slave and Four Years in the White House. Upon its publication, Keckley’s memoir created a scandal that compelled Mary Todd Lincoln to sever all ties with her, but in the decades since, Keckley’s story has languished in the archives. In this impeccably researched, engrossing novel, Chiaverini brings history to life in rich, moving style.

Hidden Mercies by Serena B Miller


At seventeen, Tobias Miller smashed his cousin’s car into a tree, killing his brother only four hours before he was scheduled to marry Claire Shetler. Unable to live with his father’s bottomless grief and anger, Tobias left the Amish church and ran away to join the Marines. Twenty-seven years later, Tobias, now called Tom, returns to Mt. Hope, Ohio, a wounded, decorated Marine helicopter pilot, and rents an apartment over Claire’s workshop.

A widowed Amish midwife, Claire is struggling to support her family. When Tom rents her room she does not recognize the disfigured soldier as the boy she once knew. She only sees the money as a godsend, though she is nervous about having a strange man so close by. Claire never dreams that she will end up falling in love with a battle-scarred soldier.

As Claire and Tom fight their way through the traumas of the past, they discover the tender mercies God has hidden along the way—including a loving father who has been praying for his prodigal son to come home and a God who makes all things new.

The House That Love Built by Beth Wiseman

Brooke has only loved one man. Owen's heart is filled with bitterness. Can a mysterious house bring them together for a second chance at love?

In the small town of Smithville, Texas, Brooke Holloway is raising six-year-old Meghan and ten-year-old Spencer on her own two years after her husband's death. Being a single-mom and running the family's local hardware store keep her busy.

While Meghan longs for a daddy, Spencer has threatened to run away if Brooke even goes out on a date. But the last thing on Brooke's mind is falling in love. When a stranger moves to town and buys a house with a mysterious past, Brooke can't contain her curiosity. As she spends time with the new owner, she wonders if maybe God is giving her another chance at happiness.

Owen Saunders fled the big city to start over in a small, rural town famous for baking the world's largest gingerbread man. Then he bought an old house to restore-for all the wrong reasons. If anything needs restoration, it is Owen's heart in the aftermath of his failed marriage. With little hope and lost faith, Owen is tempted by happiness when he meets Brooke, but his heart remains sealed shut.
As they learn more about Owen's house, one thing becomes obvious to both of them: God has put them together for a reason.

This fun activity book includes on-the-page puzzles, games, and stories—all based around the story of Noah. There is also a page of stickers for completing the activities. The cute and colorful illustrations jump off the page and keep children engaged with the activities. There's plenty for children to do, on their own or with an adult, and this handy book can be used during the holidays, on journeys, or just to fill the time on a rainy day.

Return To Me [The Restoration Chronicles #1]  By Lynn Austin

After years of watching his children and grandchildren wander from their faith, Iddo's prayers are answered: King Cyrus is allowing God's chosen people to return to Jerusalem. Jubilant, he joyfully prepares for their departure, only to learn that his family, grown comfortable in the pagan culture of Babylon, wants to remain.
Zechariah, Iddo's oldest grandson, feels torn between his grandfather's ancient beliefs and the comfort and success his father enjoys in Babylon. But he soon begins to hear the voice of God, encouraging him to return to the land given to his forefathers.
Bringing to life the biblical books of Ezra and Nehemiah, "Return to Me" tells the compelling story of Iddo and Zechariah, the women who love them, and the faithful followers who struggle to rebuild their lives in obedience to the God who beckons them home.


Please fill out the Rafflecopter below, and leave a comment as to which book you would like!