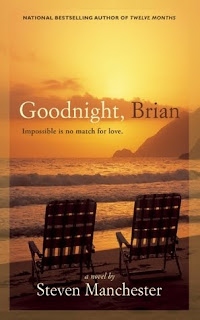 Fate was working against little Brian Mauretti. The food that was meant to nourish him was poisoning him instead, and the doctors said the damage was devastating and absolute. Fate had written off Brian. But fate didn’t count on a woman as determined as Brian’s grandmother, Angela DiMartino who everyone knew as Mama. Loving her grandson with everything she had, Mama endeavored to battle fate. Fate had no idea what it was in for.
An emotional tale about the strength of family bonds, unconditional love, and the perseverance to do our best with the challenging gifts we receive, GOODNIGHT, BRIAN is an uplifting tribute to what happens when giving up is not an option.

Steven Manchester is the author of the #1 best seller, Twelve Months, as well as Goodnight, Brian (to be released Jan. 8th). He is also the author of Pressed Pennies, The Unexpected Storm: The Gulf War Legacy, Jacob Evans, and several books under the pseudonym, Steven Herberts. His work has appeared on NBC's Today Show, CBS's The Early Show, CNN’s American Morning and BET’s Nightly News. Recently, three of Steven's short stories were selected "101 Best" for Chicken Soup for the Soul series. When not spending time with his beautiful wife, Paula, or his four children, this Massachusetts author is promoting his works or writing. Visit: www.StevenManchester.com

This story begins in the 1976 when Frank, Joan and little Ross are expecting a new family member. All are so happy and we are are at Mama's, Angela DiMartino's, RI cottage. She is a strong woman who loves God and her family, she has three Grandchildren and is eagerly anticipating the birth of this new baby.
When baby Brian arrives, the family is so happy, but the happiness only lasts a short time. Unknown to the family, outside forces are plaguing them and other families, in the form of greed. Brian is receiving tainted formula that forever changes their lives.
When the Doctor tells them that he will never be more than he is right now, they are devastated. Mama says "NO", and she means it...their is no such word as "can't". She is one feisty woman, and takes this challenge personally. You will grow to love this woman, she is a force all on her own. Loved how she faces each challenge head on.
This family is one to be envied, we would all love to have a Grandmother like Mama, and you begin to fell like you are part of her extended family. If you would love a great family read, with some heartache, but with a lot of devotion added in, then this is for you. I Loved It!

I received this book from the Author, and was not required to give a positive review.
at December 29, 2012