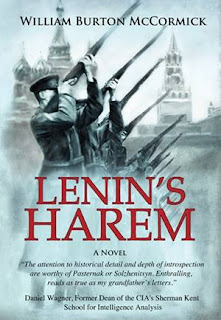 From the book jacket

Latvia, 1905. Amidst the ashes of the failed workers’ rebellions of 1905, Latvian aristocrat Wiktor Rooks finds that he has lost everything: home and heritage, his life's very purpose.

Coerced into the Russian Army, Wiktor is soon swept up into the turbulent years of the Great War and Bolshevik Revolution. In the service of his enemies, he finds himself torn between the noble classes of his birth and his new communist masters, between calls for freedom on Baltic shores and waves of oppression radiating from Moscow's centre.

Set in Russia and Latvia between 1905 and 1941, Lenin’s Harem is a story of nationhood, brotherhood and love throughout the most turbulent years of the twentieth century. The novel explores identity in a time of changing loyalties, and the search for a just struggle when all causes are tainted by bloodshed and betrayal.

William Burton McCormick was born in Maryland and grew up in Nevada. He has lived in seven countries including Latvia and Russia where he researched and wrote Lenin’s Harem.

William graduated from Brown University with degrees in Ancient Studies and Computer Science and earned an MA in Novel Writing from the University of Manchester.

William’s short fiction has appeared in “Alfred Hitchcock’s Mystery Magazine” and is included in the forthcoming anthology “Blood Promises and Other Commitments” (MMIP Books). His work was a finalist for a 2012 Derringer Award. William Burton McCormick has been awarded a Hawthornden Fellowship for 2013.

The Author has literally let us walk with the main character of this book, Latvian aristocrat Wiktor Rooks. We begin with the 1905 uprising in Latvia, and end on the road to WWII.
Wiktor is just a young boy, living with his family on their Estate, when the serf uprising happens. We walk in his shoes throughout this book.
What descriptions of being in the trenches during WWI...could just picture the clouds of gas as they covered the area. He watches the bodies being stacked like cord wood. We see that you really can trust no One!! Even as an Officer he is mistrusted because of his Aristocrat background. Hard to make any lasting friendship...if their was such a thing.
An excellent read to remember the World in the early 1900's. Although the title made me thing of a lot of Women, it actuality it means...the name of a Latvian military unit of which the main character was a part of. A work of fiction, but packed with truth!

I received this book from Knox Robinson Publishing, and was not required to give a positive review.