I Am A Reader, Not A Writer: Book Blast for Christmas Ever After 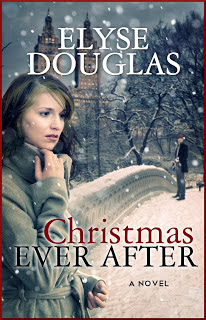 Christmas Ever After by Elyse Douglas

Can 26-year-old JENNIFER TAYLOR overcome her past—the death of her fiancé that has left her bitter and angry? Will she accept the gift of an adventure from a mysterious woman before it’s too late: a trip to New York City on Christmas Eve, where she’ll meet three men who will change her life forever?

Suddenly, everything seemed to happen at once, and in slow motion. Mrs. Stanton stepped in front of the shop, stabbing away at the snow with her cane.

Jennifer’s back tires slid away into chaos. It was as if the world was spinning away from her. She frantically fought for control of the car, but the steering wheel became useless. She was slipping away toward the east wall of Cards N’ Stuff. Jennifer held her breath.

Just then, Mrs. Stanton’s left foot found an unfortunate old patch of ice beneath the newly fallen snow. She felt it give way, and her cane, which should have been a support, slipped from her hand and sailed away into a snowdrift. Jennifer watched in horror as Mrs. Stanton’s body lifted from the earth and rose like a great bird above the spread of undulating snow. She seemed suspended in time. For a brief hopeful moment, Jennifer had the irrational belief that she could somehow scramble from her car and rescue Mrs. Stanton, as one would rescue a priceless fragile vase falling from a great height.

Mrs. Stanton’s body finally hit the snow, like a massive meteorite striking the earth. The impact threw up a plume of whiteness. The crater was deep and impressive. Mrs. Stanton let out an almighty howl that scattered chirping sparrows into the trees. Her yell was eclipsed by Jennifer’s car slamming into the garbage cans, and colliding into the side wall of Cards N’ Stuff.

Then there was silence. But only a brief one.

From somewhere, close by, came a low rumble. It was a foreboding sound, like the low moan of fate in the apprehension of an imminent catastrophe.

Cards N’ Stuff began to shimmy and quake. Icicles snapped and fell. Fractures formed on the roof. Sliding snow whooshed down in avalanches, crashing to the ground.

Mrs. Stanton was frozen in fear, looking bug-eyed, hearing a roar, like the sea.

Jennifer managed to shove open the jammed car door and roll out, falling into a mound of snow. She heard the frightening sound, struggled to her feet and staggered away from the building, running, stumbling and gasping.

There was a terrible, miserable groan as the roof buckled and plunged down into the shop in a storm of wood, roof-tiles, dirt and snow. In violent hammer-like blows, it shattered snow globes, jewelry boxes and porcelain figurines. It smashed glass displays and chopped through shelves, burying Christmas angels, Santa Clauses, Christmas cards and delicate earrings. The window Christmas displays were blown into oblivion; the Victorian town demolished; the electric train flicked away and buried by a powerful cascading shaft of dirt and ice. The family around the piano was pummeled and destroyed.

In a final act of destruction, sprinkler pipes ruptured, shooting streams of water into the air like geysers, flooding the place. Books, CDs and DVDs floated by, little boats navigating a chaotic space.

When it was finally over, an uneasy silence settled in, like a warning. 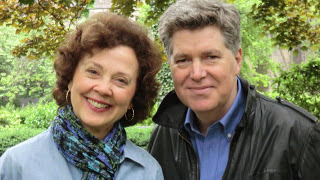 Elyse Douglas is the pen name for the husband and wife writing team of Elyse Parmentier and Douglas Pennington. Elyse's mother was a painter and her father a textile consultant. Elyse began writing poems and short stories at an early age, and graduated from Columbia University with a Master's Degree in English Literature. Douglas grew up in a family of musicians, astrologers and avid readers. His grandfather was a gifted humorist and storyteller from Kentucky.

Elyse Douglas' four novels include: The Astrologer's Daughter, Wanting Rita, The Christmas Diary and Christmas Ever After. They live in New York City.