A Groom for Greta by Anna Schmidt 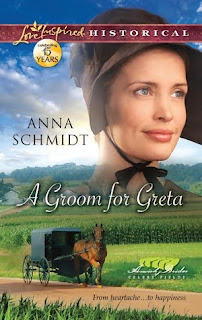 Everyone in their small Amish community expects Greta Goodloe to marry her longtime sweetheart—Greta included. So when he publicly ends their engagement, in front of newcomer Luke Starns no less, she is utterly humiliated. At least she can take comfort in matchmaking between Luke and her quiet schoolmarm sister. Yet the more she tries to throw them together, the more Luke fascinates her.A serious, no-nonsense schoolmarm should be exactly what Luke wants in a wife. Still, he can't help but be charmed by Greta's warm smile and impulsive ways. Does he dare to stray from the sensible choice and take a chance on happiness? 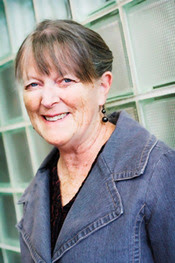 Anna Schmidt is a two-time finalist for the coveted RITA Award from the Romance Writers of America. Among her books nominated is Caroline and the Preacher, set in New York City and published by Steeple Hill. She was also a finalist in the inspirational category and the winner in the paranormal category of the Rising Star Award (Oklahoma) in 2001. In addition, her work has placed among the finalists in numerous other contests. Two of her other novels for Steeple Hill are A Mother for Amanda and The Doctor's Miracle. With over 15 works of historical and contemporary fiction published, Anna has also written four works of nonfiction about caring for older relatives and aging for AARP Books.

Anna began her writing career after receiving a grant from the Wisconsin Arts Board and the National Endowment for the Arts to write a play about Holocaust survivors. She has taught at the college level, developed curricula for national university programs and been a popular speaker at workshops and seminars. She was the keynote speaker for the Association of University Professionals in Health Administration and for the Midwest Geriatric Conference. Anna has also spoken at writing seminars for the University of Wisconsin and is a perennial favorite at the Write Touch conference in Wisconsin. Her "day" job is with an international pharmaceutical company handling public and corporate communications for its U.S. affiliate.

Anna's writing projects include a historical novel about the female prisoners who settled Australia, a chick lit proposal and a screenplay based on the true story of the White Rose resistance movement in Germany during WWII. Her screenplay, entitled For Patriot's Dream, passed the first round of judging in the Wisconsin Screenwriters Forum 2003 Contest.

When Greta Goodloe is disengaged by her Amish Fiancé in the middle of the street...she is beyond tears. Luke, the local blacksmith witnesses what happens, and consoles Greta. Luke has seen Greta around, but he is new to the area of Celery Fields FL. Luke thinks he would like a relationship with Greta's sister Lydia. He begins to think that this young woman, will be his sister-in-law, and may end up living with them?? He is really dreaming ahead!
Lydia does agree to go to a Sunday Night Singing with Luke, and now everyone thinks that the two of them will make a match? Greta's old boyfriend has begun flirting with another, even though she doesn't love Josef, she is hurt that he is already looking. Luke does come with baggage, he has come from Ontario, and hasn't said what the problem is and why he left? Was a bit surprised by this turn of events, there is a bit of deceit going on.
I did finish this in one day, and is a fast and interesting read. If you enjoy good Amish stories, this one is for you!

I received this book through Net Galley and the Publisher Harlequin, and was not required to give a positive review.