The Woman Who Wasn't There: The True Story of an Incredible Deception by Robin Gaby Fisher, Angelo Guglielmo 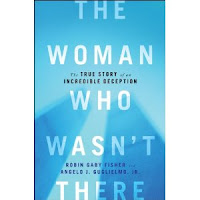 It was a tale of loss and recovery, of courage and sorrow, of horror and inspiration. Tania Head’s astonishing account of her experience on September 11, 2001—from crawling through the carnage and chaos to escaping the seventy-eighth-floor sky lobby of the burning south tower to losing her fiancé in the collapsed north tower—transformed her into one of the great victims and heroes of that tragic day.

Tania selflessly took on the responsibility of giving a voice and a direction to the burgeoning World Trade Center Survivors’ Network, helping save the “Survivor Stairway” and leading tours at Ground Zero, including taking then-governor Pataki, Mayor Bloomberg, and former mayor Giuliani on the inaugural tour of the WTC site. She even used her own assets to fund charitable events to help survivors heal. But there was something very wrong with Tania’s story—a terrible secret that would break the hearts and challenge the faith of all those she claimed to champion.

Told with the unique insider perspective and authority of Angelo J. Guglielmo, Jr., a filmmaker shooting a documentary on the efforts of the Survivors’ Network, and previously one of Tania’s closest friends, The Woman Who Wasn’t There is the story of one of the most audacious and bewildering quests for acclaim in recent memory—one that poses fascinating questions about the essence of morality and the human need for connection at any cost.

Robin Gaby Fisher is the author of New York Times bestseller After the Fire. She is a two-time finalist for the Pulitzer Prize in Feature Writing and a member of a Pulitzer Prize-winning team. She teaches narrative journalism at Rutgers University in New Jersey.

Angelo J. Guglielmo, Jr., has made two award-winning films, Idling Brando and The Heart of Steel, and has written screenplays both optioned and in development. The Woman Who Wasn't There documentary is in post-production and is produced by Meredith Viera Productions and Academy Award-winner Ross Kauffman.

What a compelling heart-wrenching story. You feel the pain that Tania Head experienced. Her world fell apart on the morning of September 11, 2001, she almost lost her own life, and she did loose her beloved Dave, her husband/fiance. She recounts her horrific tale many times in this book, how could you survive all that she has lost?
You hear about the angel in the stair-well, with the red-bandana that helps save her life. She in turn helps fill in a void in his parents life, and brings them some feeling of satisfaction on hearing how he helped her. She becomes the head of the World Trade Center Survivor's Network, and she becomes a life line to so many in need. She leads the group in helping save the "Survivor's Stairway".
She becomes best friends with Linda Gormley, among others, and when she gets stressed, she treats them terribly. There are several others, that I was worried she was going to put them over the edge, and yet most just were in awe of her. In the end she is a total FAKE! So many people loved and trusted her! Tania actually has a gift of drawing people toward her.
This book will linger with you long long after you have turned the last page. You will wonder how someone could live with themselves faking such an unimaginable horror.

I received this book from the Publisher Touchstone, and was not required to give a positive review.
at March 14, 2012