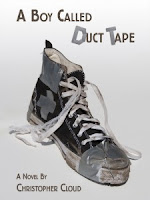 About A Boy Called Duct Tape

Pablo Perez is a 12-year-old poor kid without much going for him. His classmates have dubbed him “Duct Tape” because his tattered discount-store sneakers are held together with…you guessed it, duct tape. He can’t escape the bullying.

Pablo’s luck, however, changes after he finds a $20 gold coin while swimming in a river near his home. Pablo later buys a $1 treasure map at the county fair. The map shows the route to the “lost treasure” of Jesse James. Pablo can’t help but wonder: Is there a link between the map and the gold coin? He is determined to find out, and he, his 9-year-old sister and 13-year-old cousin hire an ill-natured cave guide, and begin a treacherous underground adventure in search of the lost treasure.

Christopher Cloud admits he came to literature late in life. “I was in my 60s before I developed a real interest in writing fiction,” he said. A Boy Called Duct Tape is Cloud’s debut middle-grade novel. It is a first-person account of three Latino children searching for the “lost treasure” of Jesse James.

Cloud began writing children’s fiction after a long career in journalism and public relations. He graduated from the University of Missouri in 1967 with a degree in journalism. He has worked as a reporter, editor, and columnist for newspapers in Texas, California, and Missouri. His work has appeared in many national publications, including Time Magazine.

He was employed by Sun Oil Company, Philadelphia, as a public relations executive, and later operated his own PR agency. He created the board game Sixth Sense in 2002. The game sold at independent bookstores nationwide.

Cloud said his next project is a young-adult novel. “I have written the first draft of a story I’m calling 16 And In Love,” Cloud said. “This story—like A Boy Called Duct Tape—is multicultural.”
Cloud lives in Joplin, Missouri.

This is a great book for kids to enjoy! It includes mystery and history!
What a wonderful summer treat these kids Pia [9] and her brother Pablo Perez [12] are about to have. They go swimming at a picturesque spring fed water hole their Dad had shown them. While looking for rocks to skip, Pablo finds a piece of gold...he was looking for a skipper for his sister.
This piece of gold...a $20 gold piece leads them on the adventure of their lives. Included in this great time is their cousin Kiki [13] who has come for a Summer visit. They meet Monroe who is a wonderful giant of a man, who is a great spelunker [cave explorer].
Although they are very poor, these kids make the most of what they have and seem to have a great love for their family. As the title of the book says...the boy called duck tape, Pablo is allowed one pair of sneaks a year, and holds them together most of the year with "duck tape"! Loved it!
I enjoyed the descriptions of the hills, rivers, and the Mother Cave! Can see the readers placing themselves right in the middle of this.

I received a copy of this book from the author, and was not required to give a positive review!
at March 11, 2012