The Lady's Mine by Francine Rivers 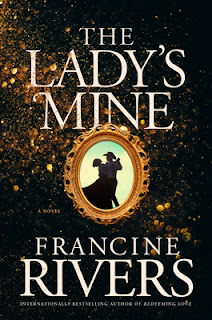 1875. When Kathryn Walsh arrives in tiny Calvada, a mining town nestled in the Sierra Nevadas, falling in love is the farthest thing from her mind. Banished from Boston by her wealthy stepfather, she has come to claim an inheritance from the uncle she never knew: a defunct newspaper office on a main street overflowing with brothels and saloons, and a seemingly worthless mine. Moved by the oppression of the local miners and their families, Kathryn decides to relaunch her uncle’s newspaper—and then finds herself in the middle of a maelstrom, pitted against Calvada’s most powerful men. But Kathryn intends to continue to say—and publish—whatever she pleases, especially when she knows she’s right.

Matthias Beck, owner of a local saloon and hotel, has a special interest in the new lady in town. He instantly recognizes C. T. Walsh’s same tenacity in the beautiful and outspoken redhead—and knows all too well how dangerous that family trait can be. While Kathryn may be right about Calvada’s problems, her righteousness could also get her killed. But when the handsome hotelier keeps finding himself on the same side of the issues as the opinionated Miss Walsh, Matthias’s restless search for purpose becomes all about answering the call of his heart.

Everyone may be looking to strike it rich in this lawless boomtown, but it’s a love more precious than gold that will ultimately save them all. 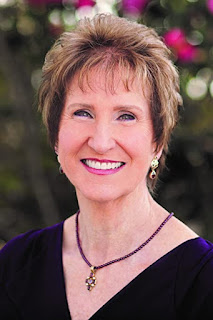 New York Times bestselling author Francine Rivers continues to win both industry acclaim and reader loyalty around the globe. Her numerous bestsellers include Redeeming Love, A Voice in the Wind, and Bridge to Haven, and her work has been translated into more than thirty different languages. She is a member of Romance Writers of America's coveted Hall of Fame as well as a recipient of the Lifetime Achievement Award from American Christian Fiction Writers (ACFW). Visit Francine online at www.francinerivers.com and connect with her on Facebook (www.facebook.com/FrancineRivers) and Twitter (@FrancineRivers).

I loved the title of this book, it plays in more than one way, with two men vying for her hand, and owning a mine!

This read is full of emotions, a young woman who was sent away from her home, a murdered Uncle! The list goes on, with our Kathryn ending up in Calvada CA, in 1875, used to the finery of Boston, and now in the middle of no where, and literally falling in the mud! Yes, there are some great chuckles here, but there are also some scary and serious situations.

One lesson the town learns is you don't tell Kathryn "no", she is a capable young woman, that often gets into scary situations, and you will be page turning for answers. I admired her faith, she didn't let anyone take her away from her God, and her inspiration sent others back to him.

A read you don't want to miss, only problem, it does end, but there is an epilogue!

I received this book through Net Galley and the Publisher Tyndale House, and was not required to give a positive review.