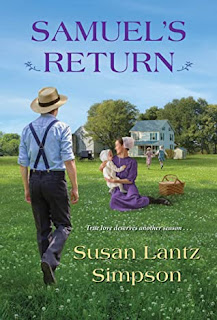 With two lively daughters, an active newborn, and a huge farm to tend, Lena Troyer has no time for impossible what-ifs. She just can’t let herself be distracted by Samuel Mast’s unexpected return. Even though her childhood sweetheart became the man she longed to marry, Samuel never saw or wrote Lena again after his family abruptly moved away. Now a widow, Lena is determined to keep Samuel's helpful ways and irresistible good humor at arm’s length—no matter how often he’s there when she needs him most . . .

A restless father with a shameful secret was the reason Samuel’s many letters never got to Lena. And it’s why Samuel can’t bring himself to tell Lena the truth—though he’s doing everything he can to regain her trust and prove he’s worthy of the resourceful woman she’s become. But as a rival for his affections complicates matters, Samuel and Lena must somehow put the past to rest—and believe that faith, honesty, and rekindled love will be more than enough to finally build a family together. Susan Lantz Simpson has been writing stories and poetry ever since she penned her first poem at the age of six. She has always loved the magic of words and how they can entertain and enlighten others. Her love of words and books led her to earn a degree in English/Education. She has taught students from Prekindergarten to high school and has also worked as an editor for the federal government. She also holds a degree in nursing and has worked in hospitals and in community health. She writes inspirational stories of love and faith and has published a middle-grade novel (Ginger and the Bully) in addition to her inspirational romances (Plainly Maryland Series and Southern Maryland Amish Romances Series). She was a finalist in the OCW Cascade fiction contest. She is a member of ACFW. She lives in Maryland and is the mother of two wonderful daughters. When she isn't writing, she enjoys reading, walking, and doing.

Lena Troyer has been through so much, she has two young daughters and an infant son, the baby was born after her husband died. Now she is dreading seeing Samuel Mast, the man who broke her teenage heart.

Samuel has finally returned to Maryland, it took him ten years, but things were not in his control. He has purchased some property, and is in the process of opening his blacksmith shop, and you see him hoping to win Lena's heart again.

The old story that can't go home again, well we hope that Samuel is able to.

The author kept my attention, there are tears, and some chuckles, and I wanted to see those desserts that kept appearing!

This book is part of a series, but it can be read alone!

I received this book through Net Galley and the Publisher Zebra, and was not required to give a positive review.
at April 27, 2021