Closer Than She Knows by Kelly Irvin 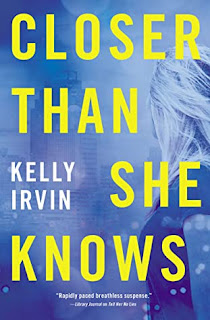 A serial killer bent on revenge . . . and striking too close to home.

Teagan O’Rourke has always loved murder mysteries. In her job as a court reporter, she has written official records for dozens of real-life murders. She’s slapped evidence stickers on crime scene photos. She’s listened to hours of chilling testimony. But she’s never known the smell of death. And she never thought she might be a victim.

A young police officer is murdered just inches away from her, and then a man calling himself a serial killer starts leaving Teagan notes, signing each with the name of a different murderer from her favorite mystery novels.

Panicked, Teagan turns to her friend Max Kennedy. Max longs for more than friendship with Teagan, but he fears she’ll never trust someone with a past like his. He wonders how much of God’s “tough love” he can take before he gives up on love completely. And he wonders if he’ll be able to keep Teagan alive long enough to find out.

As Teagan, Max, and Teagan’s police officer father race to track down the elusive killer, they each know they could be the next victim. Desperate to save those she loves, Teagan battles fears that once haunted her in childhood. Nothing seems to stop this obsessed murderer. No matter what she does, he seems to be getting closer 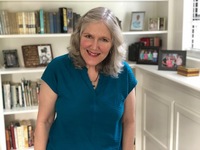 Kelly Irvin is the author of more than a dozen Amish books. Her latest series I Every Amish Season, featuring recently released Through the Autumn Air as well as Beneath the Summer Sun. The first book in the series, Upon a Spring Breeze, won the 2018 Readers Choice Award from the Faith, Hope, and Love Chapter of Romance Writers of America in the long contemporary romance category. The series is published by Zondervan/HarperCollins Christian Publishing.
She is also the author of the Amish of Bee County series that includes The Saddle Maker’s Son,  The Bishop’s Son and The Beekeeper’s Son. This last novel received a starred review from Publisher’s Weekly, calling it “a delicately woven masterpiece.” The Beekeeper’s Son was a finalist in the national 2016 ACFW Carol Awards Contest in the romance category.  Kelly is also the author of the Bliss Creek Amish series and the New Hope Amish series, both from Harvest House. She has also penned two romantic suspense novels, A Deadly Wilderness and No Child of Mine.
Among her other works are novellas in four collections, including  An Amish Christmas Gift (Snow Angels),  An Amish Market (Sweeter than Honey), An Amish Heirloom (The Midwife’s Dream), and An Amish Summer (One Sweet Kiss)
Kelly’s novel, Love Redeemed, was a 2015 finalist in the American Christian Fiction Writers (ACFW) Carol Awards contest.
Kelly is also the author of Tell Her No Lies, a romantic suspense novel that releases in November from Thomas Nelson Publishing. Publishers Weekly called her first romantic suspense novel, A Deadly Wilderness, “a solid romantic suspense debut.” She followed up with No Child of Mind. She worked as a newspaper reporter for six years writing stories on the Texas-Mexico border. Those experiences fuel her romantic suspense novels set in Texas.
The Kansas native is a graduate of the University of Kansas School of Journalism. She has been writing nonfiction professionally for more than thirty years, including ten years as a newspaper reporter. She retired in 2016 after working 22 years in public relations for the City of San Antonio Parks and Recreation Department. She is a member of ACFW and Alamo City Christian Fiction Writers. In her spare time, she blogs, reads fiction, and loves her family.

I've read many of this author's books, mostly Amish, this one is so different, and wow, most I didn't see coming.
Evil, but who is this horrible individual, I was sure guessing, but I was fooled all the way to the end. Got part of it right, but I really didn't know.
Kelly Irvin has given us a Suspense Novel that will have you looking over your shoulder, you will never see or know whom the next victim is. The big question is why? There are hints as to who, but then that becomes impossible, a copy cat, or more.
We are given a young court reporter, along with a young man who is crazy about her, and her wonderful family that surround her with love.
Don't get to comfortable here the killer has no regard for life, sadly!
I received this book through Net Galley and Thomas Nelson Publishing, and was not required to give a positive review.