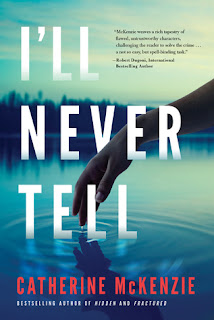 What happened to Amanda Holmes?

Twenty years ago, she washed up on shore in a rowboat with a gash to the head after an overnight at Camp Macaw. No one was ever charged with a crime.

Now, the MacAllister children are all grown up. After their parents die suddenly, they return to Camp to read the will and decide what to do with the prime real estate it's sitting on. Ryan, the oldest, wants to sell. Margo, the family's center, hasn't made up her mind. Mary has her own horse farm to run, and believes in leaving well-enough alone. Kate and Liddie—the twins—have opposing views. And Sean Booth, the family groundskeeper, just hopes he still has a home when all is said and done.

But then the will is read and they learn that it's much more complicated than a simple vote. Until they unravel the mystery of what happened to Amanda, they can't move forward. Any one of them could have done it, and all of them are hiding key pieces of the puzzle. Will they work together to solve the mystery, or will their suspicions and secrets finally tear the family apart?

A graduate of McGill University in History and Law, Catherine is a partner in a litigation boutique in Montreal, where she was born and raised. Catherine’s novels, SPIN, ARRANGED, FORGOTTEN, HIDDEN, SMOKE, FRACTURED, and THE GOOD LIAR are bestsellers and have been translated into numerous languages, including French, German, Portuguese, Polish, Turkish, Slovakian and Czech. SMOKE was named one of the Top 100 Books in 2015 by Amazon and one of the Best Books of October 2015 by Goodreads. FRACTURED was named one of the Best Books of October 2016 by Goodreads.
Catherine’s first book writing as Julie Apple (the protagonist in FRACTURED), THE MURDER GAME, was released in November, 2016. SPIN has been optioned for a television series. A short film of ARRANGED was made in 2014 and won a Canadian National Screen Institute Award. Catherine was on set while they filmed it. It was one of the highlights of her writing life.

Her next novel, I'LL NEVER TELL, is coming June 1, 2019 in the US and June 4, 2019 in Canada.
An avid skier and runner, Catherine climbed the Grand Teton in 2014.
And if you want to know how she has time to do all that, the answer is: robots.
Visit her online at www.catherinemckenzie.com, on Facebook at http://www.facebook.com/catherinemckenzieauthor, and on Twitter and Instagram at @CEMckenzie1

The author hit the name of this book right on the head, and it played so well with the plot.
You won’t get very comfortable here and you will be guessing right to the end what really happened to Amanda on that Island. I am often able to figure out the end of my reads way ahead, but not this one. Nope! I thought several times I had it all figured out, and maybe you will, but the author really had me fooled with her little dropped clues.
If you like a mystery with a lot of drama, this one should satisfy.
Be aware surprises abound and you won’t see them coming!

I received this book through Net Galley and the Publisher Lake Union, and was not required to give a positive review.