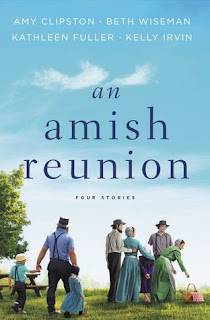 From bestselling authors in the Amish genre come four stories about reuniting with those you love.

Their True Home by Amy Clipston

When Marlene Bawell moved from Bird-in-Hand ten years ago, she was in the deepest of mourning for her mother. Now her family has moved back so her father can seek employment after being laid off. To help save money, Marlene works at the hardware store owned by Rudy Swarey’s father. She knew Rudy growing up and had a secret crush on him, though he never seemed to notice her. But just as a friendship between them begins to blossom, her life is once again turned upside down. Will Marlene ever have a chance to find her own true home?

A Reunion of Hearts by Beth Wiseman

Ruth and Gideon Beiler experienced one of life’s most tragic events. Unable to get past their grief, the couple abandoned their Amish faith and went in different directions, though neither could bear to formally dissolve the marriage. When their loved ones reach out to them to come home for a family reunion, Ruth has reason to believe that Gideon won’t be there. Gideon also thinks that Ruth has declined the invitation. Family and friends are rooting for them to reunite, but will it all be enough for Ruth and Gideon to get past their grief and recapture a time when they were in love and had a bright future ahead of them?

A Chance to Remember by Kathleen Fuller

Cevilla Schlabach, Birch Creek’s resident octogenarian matchmaker, is surprised when Richard, a man from her Englisch past, arrives in Birch Creek for a visit. While he and Cevilla take several walks down memory lane, they wonder what the future holds for them at this stage of life—friendship, or the possibility of something else?

At eighteen Hannah Kauffman made a terrible mistake. Her parents and members of her Jamesport Amish community say they’ve forgiven her. But she feels their eyes following her everywhere she goes with eighteen-month-old Evie. Thaddeus, Evie’s father, escaped this fate by running away from Jamesport. Now that Thaddeus is gone, Hannah’s old friend Phillip is stepping up to be by her side. He has waited patiently for Hannah to realize just how much he cares for her. But when Thaddeus returns after two years, Hannah can’t deny the love she feels for him. Does the fact that Phillip has waited patiently for her all this time mean that she owes him something? Can she trust either one of them? Can she trust herself? She has repented and been forgiven by the One who is most important—her heavenly Father. But is she willing to risk making more mistakes by opening herself up to love?

Award-winning, bestselling author Beth Wiseman is best known for her Amish novels, but she has also written several successful contemporary novels, set primarily in her beloved Texas, including Need You Now and The House that Love Built. Both have received glowing reviews. Beth's The Promise is inspired by a true story. Website: www.bethwiseman.com Twitter: @bethwiseman Facebook: Fans-of-Beth-Wiseman

Amy Clipston is a native of New Jersey, I’ve been writing for as long as I can remember. I often joke that my fiction writing “career” began in elementary school as I wrote and shared silly stories with a close friend. However throughout school, I only considered writing a hobby, and I never dreamt of being an author.
In 1991, I graduated from high school, and my parents and I moved to Virginia Beach, Virginia. My father retired, and my mother went to work full-time. I attended Virginia Wesleyan College in Norfolk, and I graduated with a degree in communications. I met my husband, Joe, during my senior year in college, a few days after my father had a massive stroke. Joe and I clicked instantly, and after a couple of months we started dating. We married four years later.
After graduating from VWC, I took a summer job with the U.S. Army Corps of Engineers, Norfolk District, which turned into an eleven-year career. I worked in the Public Affairs Office for four years and then moved into Planning as a writer/editor.
During that time, I continued writing for fun. It was something I did to escape stress and unwind. I didn’t share the stories with anyone except for a couple of close friends. In fact, I was even afraid to admit to my husband that I wrote.


Kathleen Fuller is the author of several bestselling novels, including A Man of His Word and Treasuring Emma, as well as a middle-grade Amish series, The Mysteries of Middlefield. Website: www.kathleenfuller.com Twitter: @TheKatJam Facebook: Author Kathleen Fuller.


Kelly Irvin is the author of the Every Amish Season and Amish of Bee County series. The Beekeeper's Son received a starred review from Publisher's Weekly, who called it “a delicately woven masterpiece.” A former newspaper reporter and retired public relations professional, Kelly lives in Texas with her husband, photographer Tim Irvin. They have two children, two grandchildren, and two cats. In her spare time, she likes to read books by her favorite authors.

A book that read like M&M’s, you can’t read just one and leave, they draw you in so that you don’t want to leave, and keep on page turning.
Each story offers something different, but all take place within an Amish community, and bring smiles and tears.
With one I was reading a conclusion to a story I had been following and loved being back with old friends.
Four novellas by four of my favorite authors and life is fun, and each of these offer a different read, and a different age group of characters, and I highly recommend them!

I received this book through Net Galley and the Publisher Zondervan, and was not required to give a positive review