Journey to Jericho (The Secret of the Hidden Scrolls #4) by M.J. Thomas, Graham Howells 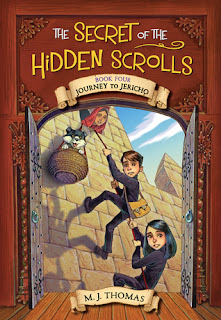 The Secret of the Hidden Scrolls series follows siblings Peter and Mary and their dog, Hank, as they discover ancient scrolls that transport them back to key moments in biblical history. In this fourth adventure, the time-traveling trio journeys to an ancient desert and finds the Israelites preparing to enter the Promised Land. With limited time to solve the secret of the scroll, Peter and Mary join Israelite spies on a reconnaissance mission to Jericho; sneak Rahab to safety; and ultimately face the scheming man in black as the walls of the city begin to crumble. Fans of the series will love this whirlwind adventure that brings the Bible to life.

M. J. Thomas grew up in Florida playing sports and riding his bike to the library and an arcade named the Cosmic Cowboy. He graduated from Liberty University, earning a bachelor’s degree in Biblical Studies.
When his son Peter was nine years old, Mike went searching for books that would teach Peter about the Bible in a fun, imaginative way. Finding none, he decided to write his own series. In The Secret of the Hidden Scrolls, Mike combines biblical accuracy with adventure, imagination, and characters who are dear to his heart. Peter is named for Mike's son Peter; Mary, for his niece; and Hank, for the family dog.
Mike lives in Tennessee with his wife, Lori; two sons, Payton and Peter; and their dog, Hank.

My eleven-year-old has been enjoying these books since they came out, yes, he is above the age, but enjoyment has no age.
I think having the dog in the story is one of the things he really loves, as he tells me about Hank and what he is doing in the story.
For me I love the idea of my child reading bible stories, but written so he can enjoy the story all the while learning.
We have the dog, but also a young brother and sister, and while visiting their great uncle they have the wondrous adventures traveling back in time, all the while trying to solve the mystery of the scroll that they have in their possession, and I could hear mine trying to solve the puzzle ahead of time!

I received this book through the Publisher Worthy/Kids Ideals, and was not required to give a positive review.