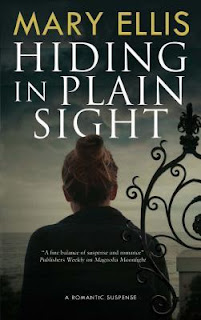 On the run from a troubled past, Kate Weller, the newest member of Price Investigations, covers her tracks, changes her name and takes a case in Charleston, South Carolina, where she can hide in plain sight.

Renting a charming room with a waterfront view, Kate sets about trying to locate her adopted client's natural siblings, only to find more questions than answers when she eventually tracks down a long-lost sister. Meanwhile, her new landlord won't stop sticking his nose into her case. As far as Kate's concerned, Eric Manfredi should focus on whatever competitor is bent on ruining his family business. But when petty vandalism turns lethal, and Eric's father is arrested for murder, Kate determines to prove his innocence. Can she find the real culprit before a killer from her own past tracks her down?

Mary Ellis has written twenty-five novels including Amish fiction, historical romance, and suspense. First in the Secrets of the South series, Midnight on the Mississippi, was a finalist for the RT Magazine’s Reviewer’s Choice Award and a finalist for the Daphne du Maurier Award for Mysteries. Second in the series, What Happened on Beale Street, won the Judge a Book by its Cover for Inspirational Romance. Last in the series, Sunset in Old Savannah has been nonimated for the Daphne du Maurier Award for Inspirational Mysteries for 2017 and the Bookseller’s Best Award for 2017. In April, Severn House will release book one of Marked for Retribution Mysteries called Hiding in Plain Sight in August.  She is also working on a novella for Kensington called Nothing Tastes so Sweet for the Amish Candy Shop Anthology. It will release in January of 2019. www.maryellis.net or www.facebook.com/Mary-Ellis/Author

I loved, this book, what a great page turner and I now can’t wait for the next book, there better be one as we rather ended on a cliff hanger.
I have enjoyed each and every book in this series, and was happy to find another new book in the series of the Price Agency!
This story contains more than one, and at times it’s non-stop action, you never know what is going to happen next. There is murder and attempted murder, arson, larceny, assault, and even blowing up cars, and more.
I want more of Kate/Jill and hope that we will soon be back with the Monfredi family, I need some more answers!

I received this book through Net Galley and the Publisher Severn House Publishers, and was not required to give a positive review.