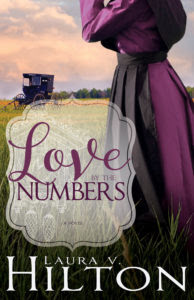 Title: Love by the Numbers

After her fiancé dies in a buggy accident, Lydia Hershberger is invited to Jamesport to manage her Mennonite aunt’s gift store while her aunt and uncle are on a mission trip. While there, Lydia gets acquainted with her aentie’s best friend, Bethel Bontrager, and her grown son, Caleb. Lydia is surprised to find herself drawn to handsome clockmaker, Caleb Bontrager. But in spite of an instant flame of attraction between them, he doesn’t seem interested. In fact, pesky Caleb treats her like he doesn’t even like her.
Bright and sparkly. That’s Caleb’s first impression of Lydia. He’s always been attracted to sparkly things. In fact, his affinity for those things, and the trouble they can cause, are exactly why he’s determined to change his ways and settle down. With Lydia’s aentie gone, he is handling the books for the gift shop and is forced to spend too much time in her presence.
When God offers Lydia a second chance at love and family, will she take it? Or will the secret Caleb harbors cause her even more heartbreak? 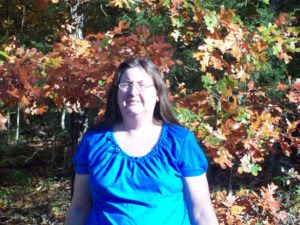 Laura V. Hilton is an award-winning, sought-after author with almost twenty Amish, contemporary, and historical romances. When she’s not writing, she reviews books for her blogs, and writes devotionals for blog posts for Seriously Write and Putting on the New.
Laura and her pastor-husband have five children and a hyper dog named Skye. They currently live in Arkansas. One son is in the U.S. Coast Guard. She is a pastor’s wife, and homeschools her two youngest children.
When she’s not writing, Laura enjoys reading, and visiting lighthouses and waterfalls. Her favorite season is winter, her favorite holiday is Christmas.

Story Behind the Story – Love by the Numbers

Caleb was a minor character in couple of my Amish books – I think he first made a by name appearance in Amish Wanderer and Christmas Admirer. A minor character. Lydia was a very minor one-time appearance in those stories, too, a girl who happened to be in the room with Bethany and Susanna at a wedding. (This story is stand alone!) But I knew when Caleb first saw Lydia that they would end up together by the way he reacted to her presence. I wondered what their story was. 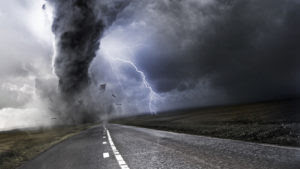 March and April is tornado season in Arkansas (and in many other states) and in 2011 we had a bad one. I was out and about that day, driving to the county seat with my five children, and there was something in the air. It was heavy, hard to breathe, and the sky was black off to the west. I’m sure I broke speed limits racing to Melbourne, and then home again so we wouldn’t be out in the storm.
Later that afternoon, tornado sirens went off. One went over our house – even from the basement we could hear the sound of a train roaring overhead. Scary. And still thanking God it didn’t touch down. Highland, Ash Flat, and Evening Shade, Arkansas were hit hard. Buildings completely gone. When we drove out that way later in the week there were pickup trucks in the tops of trees. Other things in odd and unusual places. I always wondered how they got the treetop pickups down. I would’ve stopped to watch if I’d been out there when it was done. I did hear that some of those trucks weren’t damaged at all. Unreal. My two sons and my husband both helped with clean up and my oldest son went with a crew to Joplin, Missouri, to help with clean up there.
There has been other occasions I’ve been out in tornados. Once I was in the Walmart parking lot when a tornado went through a town west of it. We could see the funnel touching down from where we stood. It did hail when we were on our way home, praying our house was still standing. It was. 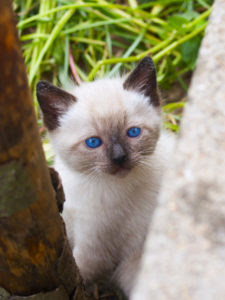 On a different note, in 2016 my oldest son came home with a kitten. She was the sweetest thing ever, and he named her Rosie. Sadly, I was highly allergic to her. I couldn’t even be around the children after they played with her. They’d have to go change clothes and wash their hands, otherwise I couldn’t breathe. Rosie was full Siamese, blue eyes and all, and she was so adorable. I allowed my son to keep her in the shed. I was about four chapters into the story when Rosie found some poison (I think, not sure) and died. We all cried.
Also about the time I was writing this, a very dear friend of a lot of writers died. I told my street team I was going to name a character after her, and was told a lot of writers would be. I agreed. And a lot of their books were released already. But Aenti Judith in this story is named after Judy Burgi. I still miss her and pray for her family.
One of the verses my daughter had to memorize in Sunday School was 2 Corinthians 4:8-9. ‘We are troubled on every side, yet not distressed; we are perplexed, but not in despair; Persecuted, but not forsaken; cast down, but not destroyed.’ Perfect for the faith message in Love by the Numbers! I love how God always provides the perfect verse for my characters’ faith messages. I’m pretty sure this verse is one I never memorized, and I never would of thought of it on my own, but God put it in my daughter’s lessons for Sunday School, so she had to memorize it – and thus I did too since I help my daughters learn their verses every week.
I hope you’ll enjoy the story!

Because of Him,
Laura V. Hilton 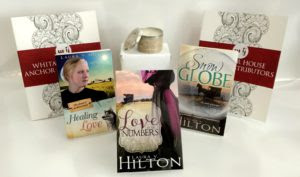