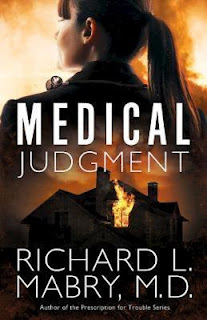 Someone is after Dr. Sarah Gordon. They've stalked her and set a fire at her home. Trying to recover from the traumatic deaths of her husband and infant daughter is tough enough, but she has no idea what will come next. Her late husband's best friend and a recovering alcoholic detective are trying to solve the mystery before it's too late, but both appear to be vying for her affection as well. Sarah finds herself in constant fear as the process plays out.
As the threats on her life continue to escalate, so do the questions: Who is doing this? Why are they after her? And with her only help being unreliable suitors in competition with each other, whom can she really trust?


Join Richard in celebrating the release of Medical Judgment by entering to win an e-reader!

One grand prize winner will receive:
Enter today by clicking the icon below, but hurry! The giveaway ends on June 21st. The winner will be announced June 22nd on the Litfuse blog.

Dr. Richard Mabry is a retired physician, past Vice-President of the American Christian Fiction Writers, and the author of five published novels of medical suspense. His books have been finalists in competitions including ACFW’s Carol Award and Romantic Times’ Inspirational Book of the Year, and have won the Selah Award from the Blue Ridge Mountain Christian Writers Conference. His forthcoming medical thriller, Fatal Trauma, is coming in May, 2019. He also has a novella, Rx Murder, available on Amazon.

Richard’s non-fiction book, The Tender Scar: Life After The Death Of A Spouse (Kregel Publishers), has ministered to multiple thousands of grieving individuals. His meditations and short pieces have appeared in The Upper Room, In Touch, and several other periodicals.

When Richard is not writing, he spends his time reading, working fruitlessly to improve his golf game, and defending his title as the world’s best Granddad. He and his wife live in north Texas and are active members of Stonebriar Community Church, pastored by Dr. Chuck Swindoll.

Dr. Mabry has done it again, and I had to page turn just to keep up with all that is going on. The story has a really sad happening with the deaths of Dr. Sarah Gordon’s husband and two year old daughter.
We find a woman angry with God, and trying to move on, but also trying to hang on to the past. While doing this something or someone so evil is stalking this poor woman, will anyone be able to help her before it is to late?
As this story goes one, I found myself not wanting to trust anyone, even her pastor; everyone is suspect to doing these horrible things to her. We have fires, gunshots, leaving the form of a body in her bed, a doll just like her daughters on her doorstep, on and on. Are they trying to drive her mad, or are they looking to kill her.
There are also men who you suspect to being the perpetrator, that seem to want to have a relationship with her, almost to a possessive nature. All I found myself wanting was peace for her, and a new life, but is that even going to be possible?
If you like to read books that keep you stomach in your throat, don’t miss this one!
I received this book through Litfuse, and the Publisher Abingdon, and was not required to give a positive review.