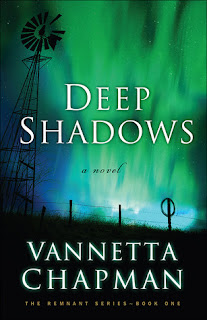 Life in Abney, Texas, is predictable and safe—until the night a massive solar flare wipes out all modern technology.

Shelby Sparks, novelist and single mom, had one goal: to provide for her diabetic son. In the wake of this global disaster, her mission hasn't changed. Only now, medication is a priceless commodity and the future resembles an apocalyptic nightmare.

Max Berkman and Shelby were once sweethearts, but he lost his chance at claiming her love years ago. When the abrupt loss of power ushers him into a leadership role, he rises to the occasion. But his highest priority—to keep Shelby and her son safe—could prove to be the biggest challenge of all.

As the brilliant northern lights give way to deep shadows, Max and Shelby's faith will be tested like never before. Only one rule remains: Find a way to survive.

In this first book in an eerily plausible dystopian series, a memorable cast of characters must navigate a familiar world thrown into chaos. 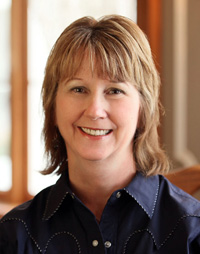 Vannetta Chapman holds a BA and MA degree in English and has published over one hundred articles in Christian family magazines, receiving over two dozen awards from Romance Writers of America chapter groups. She discovered her love for the Amish while researching her grandfather’s birthplace in Albion, Pennsylvania. She published a novel with Abingdon Press called A Simple Amish Christmasin October of 2010. Her first Quilt Shop Murder Mystery, Falling to Pieces (Zondervan) was released in September of 2011 and received the 2012 Carol Award for best mystery. She currently lives in the Texas hill country.
If you’d like to contact Vannetta about speaking at your library or scheduling an interview, please email her assistant, Kristy Kreymer. She can be reached at: kristykreymer (at) gmail (dot) com.
You may also contact Vannetta through:

Deep Shadows is a book that is going to make you think, you will become the mother of a boy with an illness that requires constant medication to keep him alive. Is this Armageddon, or pretty close to it, but life as everyone has always known it will cease to exist.
What has happened is a solar flare has wiped out all of modern technology, even the Northern Lights appear as far south as Texas. Shelby Sparks has been raising her son on her own, since her husband died, and earned a living writing romance novels, and had researched this very happening. She is with her lifelong friend Max when they see the Northern Lights, and of course Max looks out for her, and they head home, yes his truck works, it is an older non-computerized model.
We get to witness what life will probably be like if such a catastrophe were to happen, martial law happens, and it seems no one is like they used to be. There are fires, and explosions, needless death, and everyday fights for survival, and should they stay in their town, or leave and go to where they might survive. Shelby wants to stay, and so does her son, he has a new love interest, but life isn’t fair and decisions are made for them.
This is a book you won’t be able to put down, and after the last page is turned, you won’t soon forget. There are more answers to come and more to this story, but we have to wait a bit for more.
I received this book through Harvest House and the Author, and was not required to give a positive review.