The End of Law: A Novel of Hitler's Germany by Therese Down 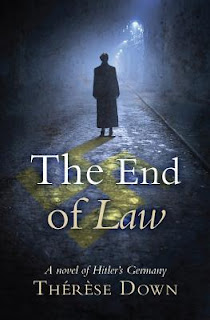 Berlin, 1933: as Hitler rises to power; the law--designed to protect and serve--becomes twisted to the will of those who dream of a pure Aryan race.

SS Officer Walter Gunther is intensely loyal to the Third Reich. His readiness to kill without question or remorse would seem to make him the ideal candidate to lead the T4 euthanasia programme. SS officer Karl Muller, a trainee doctor and engineer, is also brought into the programme, and assured that his work is consistent with the Hippocratic oath he's due to take.

Their mandate: to kill the "unworthies"--not just the Jews, but crippled children, the mentally ill, homosexuals. Hedda, Walter's wife and old acquaintance of Karl, has no idea of what their work entails. Until, that is, the fate of their families is at stake, and each must confront afresh the choices they have made.

This dark, tense novel is a compelling story of human tragedy, and man's potential to revel in, or fight against, the evil actions of a corrupted nation.

Therese Down is currently working as the Head of English at a High School in England and has been teaching English Literature and Language for over twenty years in a range of schools and colleges. She holds a MA in Employment Law and is experienced in personnel management.

The End of Law is not for the faint hearted, it is not a happily ever after, and there is no one riding off into the sunset. It is a true story with fictional characters, and the worse part of the story is that it is real and did happen.
The horrors that happened in Hitler’s Germany are beyond reason, and yet people followed merrily along, and for what? The “Jew problem”, and then it went from there to gypsies, homosexuals, imperfect children, mentally ill individuals, and they were headed for everyone but the pure Aryan, if there was such an individual.
We have names and word pictures of what these characters looked like, and Satan must have been smiling on the atrocities that were committed here. Hedda Schroeder grew up wanting for nothing, her father was a famous German chemist. She ends up marrying Walter Gunther, who ends up high in the Nazi SS, and the one who picks who lives and who dies.
Can you imagine such work, you chose which child shall not see tomorrow, and in the end no one is safe from the evil perpetrated under this regime. Maybe this should be a must read in school, as there are people out there that don’t believe any of this ever happened. Once I started reading I had to keep on, even though you might want to have tissues or a bag for nausea, the things you are about to read about are horrendous and never should have happened.
Bringing this story to light, the author did an amazing job, and can’t imagine it was easy to do.
I received this book through Kregel’s Blogger Program, and was not required to give a positive review.
at May 09, 2016