Apple of His Eye (Amish Pie #1) by Kelly Caldwell 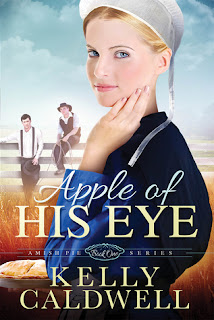 When Rob King, who is courting Tabitha Beiler, must go away for a time to aid his ailing grandfather, he charges his best friend, John Miller, with the care and keeping of the beautiful girl of his heart. John, who has been Rob’s best friend since boyhood, accepts the responsibility with serious intent. But John discovers that it is his own traitorous heart that must be guarded as he finds himself falling hopelessly in love with his best friend’s girl.

As time goes on, Tabitha begins to see the serious differences between Rob and John, and she discovers the meaning of infatuation versus real love. But it is only through her baking that she can speak fully of where her heart now lies.,


How will Tabitha admit her love for John when doing so could mean the loss of a lifelong friendship? And how will the sweetness of a treasured pie recipe reveal a love of tender but unspoken devotion?

This is Kelly's first book, and sure hope there are a lot more to come!
Facebook

Tabitha Beiler has had a hard life, but God provided her with her unmarried aunt to raise her when her parents died. Her life has been happy and she has grown up into a very caring, sweet Amish woman.
Now she believes she has met the love of her life, sweet stolen kisses, and then Rob King is gone, off to tend his sick grandfather. She is devastated and thinks of Rob all the time, of course, being a lovey girl, she is the focus of many young men, and Rob’s friend, John, has vowed to become a guardian to her until he returns.
Now John is carrying a secret, and has vowed to never marry, because of his experience when he was younger and fell in love. He cares a great deal about his friend Rob, and is surprised when Rob tells him he has found the woman he wants to marry, and when he has to go to his grandfather makes him promise to makes sure no one steals his Tabby from him.
This is a quick and interesting read that kept me turning the pages past my bed time, a different type of Amish story and one that was very enjoyable.
I received this book through Net Galley and the Publisher Charisma House, and was not required to give a positive review.