No Place to Hide (Hidden Identity, #3) by Lynette Eason 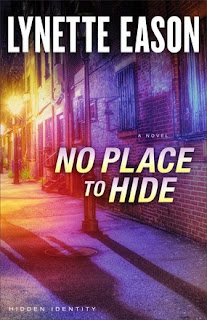 She'll defend her friend until the bitter end--but is she in over her head?
It's not every day you see your childhood friend and onetime crush on national news. Jackie Sellers just wishes it were under different circumstances. She can't believe that Ian Lockwood is wanted in connection with a terrorist plot, and she's determined to find him and help him clear his name. Unfortunately, she's not the only one looking for him. The FBI wants him captured. The bad guys want him dead. Ian just wants to stay alive long enough to prove his innocence and prevent a catastrophe.

Lynette Eason delivers nonstop action as Jackie and Ian travel a dangerous road--one that may lead straight to destruction.


Praise for the series

"For any reader looking for 'edge-of-your-seat' thrills, this series is the perfect gift."--Suspense Magazine
"Fans of Eason's and readers of Christian suspense will definitely want to check out this new series. I, for one, cannot wait to get my hands on the next installment."--Fiction Addict
"An exciting new series with action and thrilling chase scenes."--RT Book Reviews

Lynette Eason is the bestselling author of the Women of Justice series and the Deadly Reunions series, as well as No One to Trust, Nowhere to Turn, and No Place to Hide in the Hidden Identity series. She is a member of American Christian Fiction Writers and Romance Writers of America. She has a master's degree in education from Converse College and she lives in South Carolina. Learn more at www.lynetteeason.com.

Jackie Sellers will do anything for those she loves and that being said, she would give the ultimate, her life. The book opens early on with her doing just that, but is she helping a friend or a terrorist?
The disregard for human life for some of the characters here is terrible, don’t sneeze at the wrong time, or worse make a snide remark, you’re a goner. Pretty soon Ian Lockwood and Jackie are on the run from the good and the bad guys. Every one is a suspect, and evil waits for no one and no one is apt to be alive at the end.
Unfortunately, this story could be a non-fiction read, as there are terrorists infiltrating the world, and they look like everyone else and are not the ones you would suspect to bringing injustice into the world.
A read that you won’t be able to put down once you open the cover, it will put your heart in your throat, and at times you want that clock to move faster and at others to slow down. The characters are well developed here, and there are a lot of twists and turns and surprises. A really good and suspenseful read!

I received this book through the Revell Book Bloggers Tour, and was not required to give a positive review.