Beyond All Dreams by Elizabeth Camden 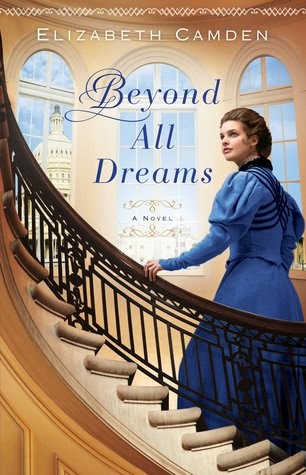 Anna O'Brien leads a predictable and quiet life as a map librarian at the illustrious Library of Congress until she stumbles across a baffling mystery of a ship disappeared at sea. She is thwarted in her attempts to uncover information, but her determination outweighs her shyness and she turns to a dashing congressman for help.
Luke Callahan was one of the nation's most powerful congressmen until his promising career became shadowed in scandal. Eager to share in a new cause and intrigued by the winsome librarian, he joins forces with Anna to solve the mystery of the lost ship.
Opposites in every way, Anna and Luke are unexpectedly drawn to each other despite the strict rules forbidding Anna from any romantic entanglement with a member of Congress.
From the gilded halls of the Capitol, where powerful men shape the future of the nation, to the scholarly archives of the nation's finest library, Anna and Luke are soon embroiled in secrets much bigger and more perilous than they ever imagined. Is bringing the truth to light worth risking all they've ever dreamed for themselves? 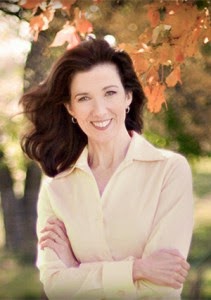 Elizabeth Camden is a college librarian in central Florida by day, but by night I can be found pounding out inspirational historical novels the moment the sun goes down. I love writing books about fiercely intelligent people who are confronted with profound challenges. As a rather introverted person, I have found that writing is the best way for me to share my faith and a sense of resilience with others.

I decided to become a librarian because I can think of no other career in which you get such a wide exposure to all aspects of recorded knowledge. I have been an academic librarian for fifteen years, where on any given day I get to research the sonnets of Shakespeare, learn what makes pelican feathers pink, or compile demographic statistics for starting a new company.
I married relatively late in life, which turned out to be an odd kind of blessing. I had gotten very good at leading a solo life, and although I was not particularly content being alone, I had become reconciled to it. Then when I was in my mid-thirties and just a few weeks after buying my first house, I met the man I was meant to spend the rest of my life with. My years as a single woman taught me many things. I learned to be independent and resilient. I learned how to manage my investments, earn and save enough money to have investments, mow my own lawn, fix the rickety appliances in my sixty-year old house, and spend the holidays on my own when travel to family was not possible. Most importantly, it taught me never to take my husband for granted. I give daily thanks for the blessing of being able to share a life with my favorite person on the planet.
As for who I am? I love old Hitchcock films, the hour before sunset, a long, sweaty run through the Florida countryside, and a glass of good wine. After spending my entire adult life on a college campus (either as a student or a librarian) I have finally been able to pursue my ultimate goal of writing professionally.

Welcome to a book that brings you back to the late 1800’s, and the new building of the Library of Congress. Walk the halls of the old library, and travel to the various rooms as we glimpse a very different time.
Anna O’Brien as where she wants to be and loves her job as the Map Librarian at the Library of Congress, she feels blessed to have such a job, and being a woman is never really secure. She lost her Dad fifteen years ago in a suspicious sinking of his ship near Cuba, or Bermuda? She can’t seem to let go of her suspicious that something is not right about how the ship was lost, and this keeps getting her into trouble.
Enter the young Congressman from Maine, he crashes into Anna’s rather quiet life, and we are going to enter deeply into his. He is dealing with his own problems, both professional and personal, and add Anna’s we are heading for a quite a time.
We find an attraction by Congressman Luke Callahan towards Anna, but she is very leery of forming any relationship with him, she could loose her job. Will Luke ever gain respect and a return of feelings from Anna?
What is the Government hiding? It will blow you mind when you find out the connection, and what is just swept under the rug. We find betrayal, lying, and hurts coming from many directions. How can a personal relationship between Luke and Anna ever survive after all that happens, only God knows, and they share a faith with their Love of Him.
I loved being back in this period of time, and learning facts that I had either forgotten or was totally new to me. Meet the young Teddy Roosevelt and learn some of his future along with other historical facts.

I received this book through Net Galley and the Publisher Bethany House, and was not required to give a positive review.
at January 06, 2015