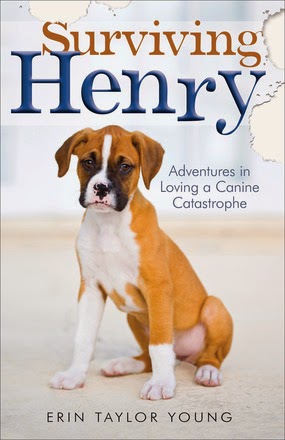 Sometimes you seek out love. And sometimes it broadsides you.
You don't always know what you're getting into when you bring home a puppy. You hope for laughs and cuddles, long walks and a wagging tail. And sometimes you get . . . Henry.

Henry is a boxer who suffers from Supreme Dictator of the Universe Syndrome. He vandalizes his obedience school, leaps through windows, cheats death at every turn, and generally causes his long-suffering owner Erin Taylor Young to wonder what on earth she did wrong that God would send this dog to derail her life.

But this rogue torpedo of a dog wasn't sent to torment his owner--well, not just to torment her. Through all the hair-pulling and questioning of her own sanity, Erin learns something very powerful from Henry, a dog who brings new meaning to the concept of unconditional love.

Through his laugh-out-loud antics and jaw-dropping escapades, Henry will careen into your life and steal your heart.

Erin Taylor Young is a humor writer who works in a library, where she gets to wander among books. She loves football, photography, and hiking in national parks. Erin has written for Today's Christian Woman, Outdoor Guide Magazine, and MidWest Outdoors. She was a finalist in the Phoenix Rattler 2011-2012 writing contest and in the Genesis 2012 contest for her contemporary fiction. She lives in Oklahoma with her well-meaning husband, two polar-opposite sons, and a noncompliant dog. Find out more at www.erintayloryoung.com.

First I should state that my first dog was a boxer, and I have an affinity for them, and all dogs for that matter. Yes, I am a dog lover! That being said, I have never had a dog like Henry, and am so glad of that!
Surviving Henry is one amazing and well written, and wonderfully delightful read. Erin Taylor Young has done a great job, and made me feel I was part of the family or her to be exact. I felt that Henry doesn’t have an off button, and he is just to darn smart, sometimes to smart for his own good.
By the end of the book I thought for sure poor Henry or Erin would be broken or deceased. Talk about cats having nine lives, this fellow has a lot more, and seems to be quickly using them up. He is such a handsome guy, as you can see by the cover with cute little bites out of it!
This family really has found the right dog, and he is well placed living with him, hate to think what would have happened to him if someone else had chosen him. The word pictures Erin paints will have you rolling on the floor, or heading to the emergency room. Ever have that feeling that you don’t know how you got out of danger, only by the Grace of God, well there is plenty of that in this story, God’s hand on Henry. You are in for a sweet, humorous read and a page-turner at that. Enjoy!

I received this book through Revell’s Book Blogger Tour, and was not required to give a positive review.
at August 04, 2014