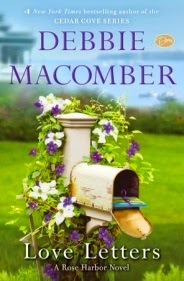 Summer is a busy season at the inn, so proprietor Jo Marie Rose and handyman Mark Taylor have spent a lot of time together keeping the property running. Despite some folks’ good-natured claims to the contrary, Jo Marie insists that Mark is only a friend. However, she seems to be thinking about this particular friend a great deal lately. Jo Marie knows surprisingly little about Mark’s life, due in no small part to his refusal to discuss it. She’s determined to learn more about his past, but first she must face her own—and welcome three visitors who, like her, are setting out on new paths.

Twenty-three-year-old Ellie Reynolds is taking a leap of faith. She’s come to Cedar Cove to meet Tom, a man she’s been corresponding with for months, and with whom she might even be falling in love. Ellie’s overprotective mother disapproves of her trip, but Ellie is determined to spread her wings.

Maggie and Roy Porter are next to arrive at the inn. They are taking their first vacation alone since their children were born. In the wake of past mistakes, they hope to rekindle the spark in their marriage—and to win back each other’s trust. But Maggie must make one last confession that could forever tear them apart.

For each of these characters, it will ultimately be a moment when someone wore their heart on their sleeve—and took pen to paper—that makes all the difference. Debbie Macomber’s moving novel reveals the courage it takes to be vulnerable, accepting, and open to love.

Debbie Macomber is a #1 New York Times bestselling author and one of today’s most popular writers with more than 170 million copies of her books in print worldwide. In her novels, Macomber brings to life compelling relationships that embrace family and enduring friendships, uplifting her readers with stories of connection and hope. Macomber's novels have spent over 750 weeks on the New York Times bestseller list.  Eight of these novels hitting the number one spot.
In 2014, Macomber's all-new hardcover publications will include Blossom Street Brides (March), Love Letters: A Rose Harbor Inn Novel (August) and Mr. Miracle (October) and paperback editions of the #1 bestseller Starting Now (April) and her acclaimed Christmas novel, Starry Night (October).
In addition to fiction Macomber has also published two bestselling cookbooks; numerous inspirational and nonfiction works; and two acclaimed children’s books.
Macomber's beloved and bestselling Cedar Cove Series became Hallmark Channel’s first dramatic scripted television series, Debbie Macomber's Cedar Cove, which was ranked as the top program on cable when it debuted in summer 2013. Hallmark is now filming a second season of Debbie Macomber's Cedar Cove which will premiere this July 19.  In addition, Macomber’s upcoming Christmas novel, Mr. Miracle, will be made into an original movie premiering on Hallmark Channel in fall 2014. Previously, Hallmark Channel has produced three successful Christmas movies based on Macomber's bestselling Christmas novels, Mrs. Miracle, Call Me Mrs. Miracle and Trading Christmas.
Macomber owns her own tea room, Victorian Rose Tea Room & yarn store, A Good Yarn, named after the shop featured in her popular Blossom Street novels. She and her husband, Wayne, serve on the Guideposts National Advisory Cabinet, and she is World Vision’s international spokesperson for their Knit for Kids charity initiative.
A devoted grandmother, Debbie and her husband Wayne live in Port Orchard, Washington (the town on which her Cedar Cove novels are based) and winter in Florida.

I just finished the next book in the Rose Harbor Inn series, and of course, I want more. Jo Marie is still dealing with the loss of Paul, and Mark is still working as the neighborhood handyman, and being mysterious.
We are about to be involved in the lives of a few more of Jo Marie’s guests at the inn, and by the end we know them fairly well. You will feel the heartbreak of some of them, and the joy of others. It just feels so great to be back in the Cove, and we meet some of our old friends in a pass by visit, and although I would really like to catch up again in their lives, it just felt great to be with them again.
Loved the connecting theme between these stories, Love Letters, and how they played a part in the lives of these people. Letters that later in their lives have a huge impact on them. Will the letters be positive in how they are received or play a roll in ending their relationship?
I wish I was able to spend time on the deck at the Rose Harbor Inn, and cannot wait for the next book, and a slight preview was offered at the end of the book. Enjoy!

I received this book through Edelwiss, and was not required to give a positive review.