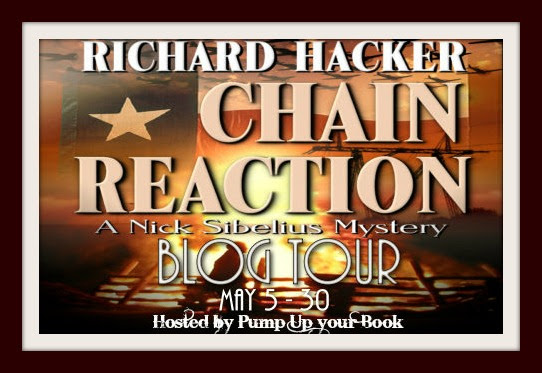 Pump Up Your Book is pleased to bring you Richard Hacker’s Chain Reaction virtual book tour May 5-30! 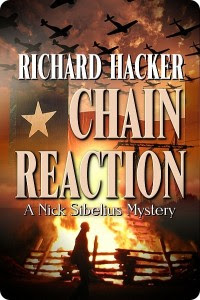 Title: Chain Reaction
Author: Richard Hacker
Publisher: Champagne Books
Pages: 232
Genre: Thriller
Format: Kindle
When Nick and his partner in love and business, Theresa, take a client caught in a grudge between competitive bass fisherman, they soon discover he has unknowingly entangled himself in a plot by healthcare magnate, Bruce Reynolds, to take over Texas and secede from the Union. Hoping to pass the case to the Texas Rangers, Nick is instead recruited to head the Governor’s special task force. He learns Governor Fran Adamson’s major campaign contributor and secret lover, Reynolds, has a plan to resurrect the Republic of Texas.  Faced with Reynolds’ hit woman killing enemies of the Republic and a remotely controlled drone air force destroying strategic targets across the state, Nick and Theresa make a desperate attempt to prevent civil war, the destruction of the Governor’s political career, and Dillon’s murder, while keeping their love intact. In his scheme for glory, Bruce Reynolds didn’t plan on Nick Sibelius, who wants the wannabe secessionist to know, when he says don’t screw with Texas, he damned well means it. 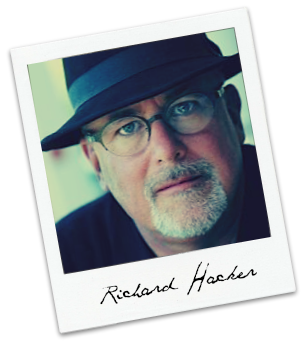 Richard Hacker is the author of CHAIN REACTION, the third installment in the Nick Sibelius crime series. Champagne Books released DIRTY WATER, the next novel in the Nick Sibelius series after TOXIC RELATIONSHIP, in June, 2013. His first novel, TOXIC RELATIONSHIP, released August, 2012 by Champagne Books was a 2011 Writer’s League of Texas (WLT) finalist, where in addition, SHAPER EMERGENCE won best novel in the Science Fiction category.  He is a member of the Pacific Northwest Writers Association.
After living many years in Austin, Texas where he worked as a leadership coach, public speaker and management trainer, he moved with his high school sweetheart to Seattle.  While he misses the big skies of Texas, Richard has grown fond of the Pacific Northwest.  His writing partner, a springer spaniel named Jazz, helps with proofreading and ball fetching.
You can visit Richard’s website at www.richardhacker.com.

Richard Hacker is giving away (2) 3 ebook sets of his Nick Sibelius series!