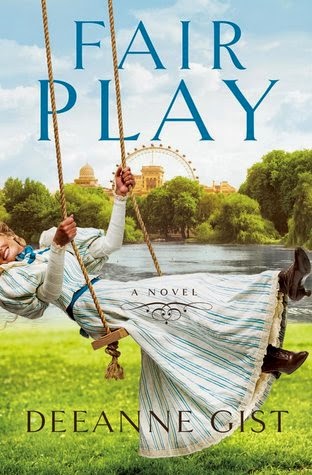 Saddled with a man’s name, the captivating Billy Jack Tate makes no apologies for taking on a man’s profession. As a doctor at the 1893 Chicago World’s Fair, she is one step closer to having her very own medical practice—until Hunter Scott asks her to give it all up to become his wife. Hunter is one of the elite. A Texas Ranger and World’s Fair guard specifically chosen for his height, physique, character, and skill. Hailed as the toughest man west of any place east, he has no patience for big cities and women who think they belong anywhere but home… Despite their difference of opinion on the role of women, Hunter and Billy find a growing attraction between them—until Hunter discovers an abandoned baby in the corner of a White City exhibit. He and Billy team up to make sure this foundling isn’t left in the slums of Chicago with only the flea-riddled, garbage-infested streets for a playground. As they fight for the underprivileged children in the Nineteenth Ward, an entire Playground Movement is birthed. But when the Fair comes to an end, one of them will have to give up their dream. Will Billy exchange her doctor’s shingle for the domesticated role of a southern wife, or will Hunter abandon the wide open spaces of home for a life in the “gray city,” a woman who insists on being the wage earner, and a group of ragamuffins who need more than a playground for breathing space?

After a short career in elementary education, Deeanne Gist retired to raise her four children. Over the course of the next fifteen years, she ran a home accessory and antique business, became a member of the press, wrote freelance journalism for national publications such as People, Parents, Parenting, Family Fun, Houston Chronicle and Orlando Sentinel, and acted as CFO for her husband’s small engineering firm--all from the comforts of home.

Squeezed betwixt-and-between all this, she read romance novels by the truckload and even wrote a couple of her own. While those unpublished manuscripts rested on the shelf, she founded a publishing corporation for the purpose of developing, producing and marketing products that would reinforce family values, teach children responsibility and provide character building activities.
After a few short months of running her publishing company, Gist quickly discovered being a "corporate executive" was not where her gifts and talents lie. In answer to Gist’s fervent prayers, God sent a mainstream publisher to her door who licensed her parenting I Did It!® product line and committed to publish the next generation of her system, thus freeing Gist to return to her writing.
Eight months later, she sold A Bride Most Begrudging to Bethany House Publishers. Since that debut, her very original, very fun novels have rocketed up the bestseller lists and captured readers everywhere.  Add to this two consecutive Christy Awards, four RITA nominations, rave reviews, and a growing loyal fan base, and you’ve got one recipe for success.
Her latest releases, Maid To Match , Love on the Line, and It Happened at the Fair are now available.
Gist lives in Texas with her husband of thirty years and their border collie. They have four grown children. Click here to find out the most up-to-the-minute news about Dee.

Travel back in time to right after the O’Leary cow Chicago fire and attend the 1893 Chicago Worlds Fair. Deeanne Gist has us walking in their footsteps and we feel we are at the fair, with the inclusion on old pictures of the buildings, and wonderful descriptions. We put faces to the people, although fictional, we become absorbed in their lives, and those around them.
We have a young woman doctor, and of all things she has two male first names, Billy Jack, talk about confusing people. Woman doctors at that time were a rarity, and one would suppose that with that name a man. We also have a Texas Ranger, Hunter Scott, a very self-confidant man, with cute attributes. You will be chuckling when you see how these two meet, and life with them becomes very interesting.
Yes it is definitely a man’s world and Billy is trying to succeed here, but both she and Hunter have big hearts and lots of compassion. There is a lot included in this story, besides walking into the poorest parts of Chicago, and see such poverty. We visit the jail that is so crowded that people and children, yes children, have to stand up, if they sit they are in human waste. Can’t even imagine! Then there are the gangs, and in a way a lot like today, with bullies, and weapons.
Can these two opposite individuals forge a relationship, with so much going against them, along with long held convictions? Will they be able go give an inch here and there; it sure doesn’t look like it. We even have a cameo of people from previous books here, if you have read the first book It Happened At The Fair, you will recognize them, and if you haven’t be sure to pick it up, it is another keeper.

I received this book from Howard Books, and was not required to give a positive review.