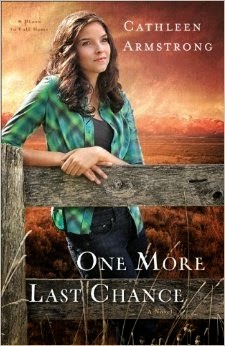 Sarah Cooley has come home to Last Chance, New Mexico, for one reason–because it doesn’t change. After an engagement gone bad with a man who wanted to change everything about her, Sarah is more than ready for the town whose motto may as well be, “If it ain’t broke, don’t fix it.”
Chris Reed, on the other hand, wants nothing more than to spark some change in the little town. As the new owner of the Dip ‘n’ Dine, he’s shaking things up to draw folks from all over the Southwest into his restaurant.
As it turns out, the winds of change are blowing into Last Chance–just not in the ways that Sarah or Chris might expect.
With the same evocative writing and fascinating characters that won fans for her debut novel, Cathleen Armstrong invites readers back to Last Chance for a soul-searching, romantic story of two people navigating the twists and turns of small-town life. Cathleen Armstrong grew up in New Mexico knowing two things were true:  Any time you could spend reading was time well spent, and that one day I, too, wanted to write books. Both certainties presented problems. In the first instance, my parents and teachers felt that while reading was good, even wonderful, time must also be allotted to chores, homework, and even social interaction. Psssh. They never did convince me on that one. The second difficulty was harder to get around. I knew I was supposed to write what I was familiar with, but my family had not cooperated in placing us someplace interesting. I thought if they had tried just a little harder, if my granddad had homesteaded in, oh, New York City, or my parents had taught school in, say, China, I would be loaded with fascinating things to write about. But as it was, we all lived in ordinary New Mexico, with its ordinary hundred mile vistas, ordinary thunderstorms boiling up on a hot summer afternoon and pounding the earth before they rumbled away at sunset. And ordinary people with names like Baca and Begay whose roots reached from hundreds to thousands of years into the pale, gravely soil. You can see my predicament.
The reading never stopped, but the writing was put on hold as I married my high school sweetheart, and moved with him first to Arizona and then to California. Our three children came, grew up, married and began families of their own with a speed that still makes my head spin.
Finally it is time to write, and I have long since realized that the last word that describes my home state is ordinary. Long ago it began to be known as The Land of Enchantment.  I can’t wait to show you why.

Oh how wonderful to be reunited with loved ones, that is exactly how I felt when I picked up Cathleen Armstrong’s new book One More Last Chance. This is a story of a returning college graduate, and Granddaughter of Elizabeth, Sarah Cooley. She wants to return to Last Chance, the place she grew up in and begin her teaching career.
A new comer, Chris Reed, now owns the Dip ‘n’ Dine, and we enjoy again the antics of Juanita and the famous cook Carlos. You will enjoy the banter between these folks; they are always threatening to quit. While Chris is trying to put his stamp on his new place, Carlos gives him a lot of opposition. With the need to bring in more customers to keep the place out of the red, you will love what happens and how things pull together.
Chris also is very concerned about his niece Olivia, his sister Kaitlyn is struggling as a parent, and I was aghast that she left a seven-year-old alone, wait until you find out how she solves the problem, after Chris finds out. Olivia does come for a visit, or stay, and she will worm her way into your heart really fast. She is a tough little cookie for a little girl, and has won her share of fights.
This is a place where almost everyone is there for each other. Loved how they all rally around when there is a need. We also find a bit of romance in the air for Sarah with her long time boyfriend Brandon. He has settled in Chicago, and although Sarah has found him very controlling in the past, has given him another chance to resume their relationship. She does not want to leave her town, and they begin a long distance romance, mostly by phone.
This is a real page-turner, and a very fast read; you just have to know what is going to happen. I really enjoyed this sweet read, and recommend you read it too. Now this is the second book in this series, you don’t need to read the first, but don’t deprive yourself, it is also great!

I received this book from the Publisher Revell, and was not required to give a positive review.