A stipulation of the Patriot Act gave Chief Sam Jenkins an easy job; investigate all the civilians working for the Prospect Police Department. But what looked like a routine chore to the gritty ex-New York detective, turned into a nightmare. Preliminary inquiries reveal a middle-aged employee didn’t exist prior to 1975.
Murray McGuire spent the second half of his life repairing office equipment for the small city of Prospect, Tennessee, but the police can’t find a trace of the first half. After uncovering nothing but dead ends during the background investigation and frustrations running at flood level, Jenkins finds his subject lying face down in a Smoky Mountain creek bed—murdered assassination-style.
By calling in favors from old friends and new acquaintances, the chief enlists help from a local FBI agent, a deputy director of the CIA, British intelligence services, and the Irish Garda to learn the man’s real identity and uncover the trail of an international killer seeking revenge in the Great Smoky Mountains. 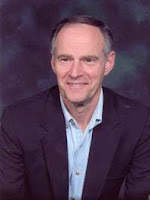 Wayne Zurl worked as a police officer for twenty years and retired from New York to East Tennessee. In 2006 he began to write crime fiction. Seven of his novelettes have been published as audio books and Kindle books. In January 2011, his first novel, A NEW PROSPECT, will be published in book form. The story follows the adventures of an ex-New York detective who finds a job as police chief in a small Tennessee city.

Chief Sam Jenkins a thoroughly enjoyable and loveable character...he is in charge of the Prospect Police Department in TN. What an adventure you begin from the start of the book to the very end! He is engaging and a people's person...and loves his wife! Love how he flirts in a comforting way...others would have gotten in trouble!
What begins as an innocent request for funds under the Patriot Act...a security check on employees, ends up as an international killer being loose in TN. Murray McGuire the office equipment repairer, seems to not have existed for part of his life?
We have the FBI called in, with the way the Chief works his magic way of getting what he wants. When the FBI also comes up with dead ends...he also has a friend in the CIA. From there we use British Intelligence, and the Irish Garda.
We travel along on a page turning read....really wild and entertaining. The way things turn out is nothing less than amazing. I love it. There are also some unanswered questions...and don't know if they will be answered in the future? I for one will be reading more of Chief Sam Jenkins mysteries!!

I received this book through Pump Your Book Virtual Tour and the Author Wayne Zurl, and was not required to give a positive review.
at August 23, 2012