***Special thanks to Lynnette Bonner for sending me a review copy.*** 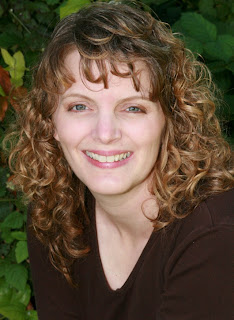 The daughter of missionaries, Lynnette was born and raised in Malawi, Africa. After graduating high school from Rift Valley Academy, a boarding school in Kenya, she attended Northwest University in Kirkland, Washington where she met her husband, Marty. They married in 1992 and moved to Pierce, Idaho a few years later.

Marty and Lynnette have four children, and currently live in Washington where Marty pastors a church and Lynnette works as an administrative assistant. 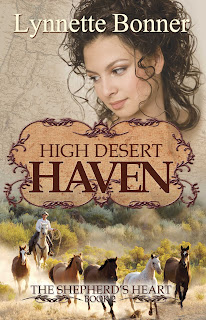 Is Jason Jordan really who he says he is?
Everything in Nicki's life depends on the answer.

When her husband dies in a mysterious riding accident, Nicki Trent is left with a toddler and a rundown ranch. Determined to bring her ranch back from the brink of death, Nicki hires handsome Jason Jordan to help. But when William, her neighbor, starts pressing for her hand in marriage, the bank calls in a loan she didn't even know about, bullets start flying, and a burlap dummy with a knife in its chest shows up on her doorstep, Nicki wonders if this ranch is worth all the trouble.

To make matters worse, terrible things keep happening to her neighbors. When her friend's homestead is burned to the ground and William lays the blame at Jason's feet, Nicki wonders how well she knows her new hand - and her own heart.

A desperate need. Malicious adversaries. Enticing love.
Step into a day when outlaws ran free, the land was wild, and guns blazed at the drop of a hat.

High Desert Haven is a work of fiction. References to real people, events, establishments, organizations, or locales are intended only to provide a sense of authenticity and are used fictitiously. All other characters, incidents, and dialogue are drawn from the author’s imagination.

Printed in the U.S.A.

A truer example of walking in God’s Grace and Mercy would be hard to find.

AND TO MY SIBLINGS:

BETHANY AND HERB,
JON AND PATTI,
MELISSA AND KEVIN

I love you all and am so glad I can call you family twice—once through our own blood, and once through Christ’s.

Once again, I owe much thanks to my English-teacher mother. I can honestly say I wouldn’t be here, writing this sentence, if it wasn’t for her encouragement along my writing journey.

Lesley, my crit-partner-extraordinaire, thanks for all your input. I’m so thankful God brought you into my life. I truly appreciate you (even when I’m grumbling through a rewrite).

Psalm 23
A PSALM OF DAVID

The Lord is my shepherd; I shall not want.
He makes me to lie down in green pastures;
He leads me beside the still waters.
He restores my soul;
He leads me in the paths of righteousness For His name’s sake.
Yea, though I walk through the valley of the shadow of death, I will fear no evil;
For You are with me;
Your rod and Your staff, they comfort me.
You prepare a table before me in the presence of my enemies;
You anoint my head with oil; My cup runs over.
Surely goodness and mercy shall follow me All the days of my life;
And I will dwell in the house of the Lord Forever.

The Prineville bank was stuffy and hot. The teller had obviously forgotten to turn down the damper on the wood stove. The heat had felt nice to William Harpster for a few minutes after coming in from the single-digit temperature outside. Now, sitting across from the banker, Tom Roland, he frowned.
Behind his desk, Tom mopped his sweaty brow and tossed an occasional irritated glance at the teller.
William paid no attention to the teller. His eyes were fixed solely on the short, paunchy, balding Roland seated across from him. “I told you it would take some time.”
“It’s been over two years!” The words were forceful but voiced low so as not to reach the ears of the clerk. “The Association is going to be running us off if we don’t come up on the good side of this deal. We guaranteed them we’d have the small-timers gone by next month. You said you could get the job done!”
William’s eyes narrowed. “Do you think I don’t know that? You’re the one who said he was the perfect man for our plan! It’s not my fault he’s welching on his end.” His voice became a little too loud and drew a look from the curious teller.
But at that moment a patron entered the building, taking the man’s interest off their conversation. When it was once again safe to resume, Tom’s pale blue eyes flashed. “Keep it down, would you? This is not my fault. First,” the banker held up one short finger, “his wife isn’t nearly as timid and withdrawn as you said. She’s made friends with over half the country, for goodness’ sake! Second, he’s no longer willing to go along with our plan. And now…” A third finger joined the first two. “You’re telling me you think he might have a herd of horses back in those hills that could pay off his loan?”
William rubbed the back of his neck. “I don’t know. Things just don’t add up. He’s been making his payments?”
“Right on time, every time.”
William sighed. There was only one way to ensure their plan would work. “We know what the Association thinks. But how badly do you want your share of that land?”
Tom Roland dabbed at his glistening pate with a handkerchief. Then, leaning back, he lit a cigar and blew a ring of smoke in William’s direction. He wanted that land. The original owner had given up on ranching and moved back to Chicago, leaving the land up for sale. Tom had been tempted to buy the land himself, but then John Trent had walked into his bank. The only reason Tom had loaned John the money was that he was almost assured the gambler wouldn’t be able to come up with his payments. Then the land would revert to the bank, where Tom could discreetly snap it up at a lower price. That and the fact The Stockman’s Association had needed a scapegoat for their dirty work. But then John had developed a conscience. And, on top of that, he hadn’t missed one payment.
Tom ran his handkerchief across the back of his neck. Five thousand acres of the finest range land in central Oregon, and half of it was to be his. Well, maybe more than half, but he was careful to keep that thought off his face. Yes. He wanted that land very much. But a couple of things bothered him. “What about his wife?”
William smiled sardonically. “Let me worry about the little woman. Once John is out of the way, she’ll give up. There’s no way she’ll be able to make a go of it. They’ve only got two hands.”
“The Stockman’s Association will break loose with all the fury of Hades if this doesn’t pan out,” Tom warned. “They were plenty upset that I let him buy that land in the first place. And if things don’t work out for me, you know they certainly aren’t going to work out for you, right?”
“Things couldn’t be clearer. Have I ever let you down before?”
Tom blew another ring. “No, William, you haven’t. But let’s make sure this isn’t the first.”
William’s gaze hardened. “Tom, this better be the last time you need my services. A man’s patience can only be stretched so far.”
“Just do your job, William. Do your job and let the future take care of itself.”
The men glared at each other across the desk. Tom didn’t want to be the first to look away. Finally William conceded the battle.
Tom looked down at his desk, pulling in a deep drag on his cigar. “Now, back to the job at hand. I think we both know there is only one way to solve this little problem.”
The two men’s eyes locked. A silent understanding passed between them.
William stood, straightened his cowhide vest with a tug, and placed his hat carefully on his head. He shook Tom’s fleshy hand and said loud enough for the teller to hear, “Thanks. You won’t regret making me this loan, Mr. Roland.”
With that, he moved toward the door, stepping out into the cold. He took a cleansing breath of the refreshing air, then headed toward the livery, his boots thudding loudly on the boardwalk. He had a job to do back home. And maybe, just maybe, if he played his cards right, by the end of the year he’d be owner of some of the finest range land in Oregon, not to mention the husband of one beautiful, desirable Mrs. Dominique Trent. A smile lifted the corners of his mouth at the thought. Yes, indeed, now that was a dream worth chasing.

Once I started reading this book, I couldn't put it down. The story starts back in the 1880's, when John Trent happens upon the Vasquez family in California. He sees Dominique [Nicki] and decides he wants her for his wife, and pays for her in gold. Her family is desperate and she goes with him willingly.
When the story resumes Nicki is living on a ranch in Oregon. Her husband has just died and she doesn't know what she is going to do? She places an ad in the newspaper, and Jason Jordan feels that God has place it on his heart to go and work for Nicki.
What an adventure, at times I almost couldn't keep reading, and was yelling no. There is a lot of things that happen, and some are so gruesome...because of some evil people. Lynnette Bonner has written a captivating story, it is filled with the love of the Lord, good vs evil. I for one did not want the story to end.

I received this book from First Card Tours and the author Lynnette Bonner, and was not required to give a positive review.