Through Rushing Water by Catherine Richmond

Sophia Makinoff is sure that 1876 is the year she's going to become the wife of an up-and-coming congressman. But when the congressman humiliates her by proposing to her mousy roommate, Sophia wants nothing more than to disappear and avoid the wedding plans. She grasps at her first opportunity for escape and signs up for the Board of Foreign Missions.

She thinks she'll be going to China . . . but even running away doesn't go as planned when she's instead sent to the Ponca Indian Agency in the Dakota Territory. It's an abysmal, primitive place for a lady of society, but as she gets to know the people, she discovers she can't abandon them. The motives that led her there were anything but pure, but she finds a new purpose in trying to protect "the least of these."

The water rushes around her—literally and figuratively—as Sophia learns that the only way to fulfill her purpose is to ignore the distractions and focus on God's leading. 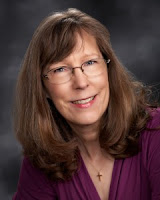 I was busy raising a family, working as an occupational therapist, and trying to remember where I hid the chocolate, when a song sparked a story within me. The journey to publication has been long, but full of blessings. I couldn’t have done it without ACFW, RWA, and FHL, the inspirational chapter of RWA, and Nebraska Novelists critique group.

I was born in Washington, DC, grew up in northern Virginia, attended Western Michigan University, and moved around a lot for my husband’s aviation career. Maybe our paths have crossed; shoot me an email and we’ll figure it out!

My favorite place to write is the porch. Then I reward myself with reading time in my air chair – and chocolate, of course!
Vist http://catherinerichmond.com/

I so enjoyed Catherine Richmond's Spring for Susannah that I really wanted to read her next book...and it does not disappoint!
We begin with Sophia Makinoff teaching at girls college, and convinced she is about to marry a new Congressman. When things don't turn out as planned she attends a Missionary Meeting and immediately signs up...thinking she is going to China. Again things don't turn out as she has planned and we find her in South Dakota at Ponca Indian Agency where she will teach. What turns out for her to be a disappointment soon turns into a blessing.
Willoughby Dunn or Will [the carpenter] Nettie and Henry Granville[Mom and son [Rev] and James Lawrence[the Indian Agent]. These are the people that Sophia will be spending her time with, along with the Indian children and adults. Will turns out to be such a blessing...he turns discards into something usable...like a dipper for the children to drink their water from using tin cans. Nettie does the cooking, and becomes a dear friend to Sophia.
Unfortunately the story is based on actual fact...and I find it heartbreaking. Come along and experience some of the History in the making of our Country, you will easily get lost in this book. We may not agree with what happens to these innocent people, but it brings to light the facts.

I received this book through Netgalley and the Publisher Thomas Nelson, and was not required to give a positive review.
at July 16, 2012