The Nurse's Secret by Amanda Skenandore 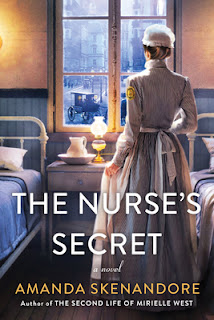 Set in 1880s New York and based on the little-known story of America’s first nursing school, acclaimed author Amanda Skenandore’s new historical novel is a fascinating story of one woman’s search for identity and independence.

In the slums of 1880s New York, Una Kelly has grown up to be a rough-and-tumble grifter, able to filch a pocketbook in five seconds flat. But when another con-woman pins her for a murder she didn’t commit, Una is forced to flee. Running from the police, Una lies her way into an unlikely refuge: the nursing school at Bellevue Hospital.

Based on Florence Nightingale’s nursing principles, Bellevue is the first school of its kind in the country. Where once nurses were assumed to be ignorant and unskilled, Bellevue prizes discipline, intellect, and moral character, and only young women of good breeding need apply. At first, Una balks at her prim classmates and the doctors’ endless commands. Yet life on the streets has prepared her for the horrors of injury and disease found on the wards, and she slowly gains friendship and self-respect.

Just as she finds her footing, Una’s suspicions about a patient’s death put her at risk of exposure, and will force her to choose between her instinct for self-preservation, and exposing her identity in order to save others.

Amanda Skenandore brings her medical expertise to a page-turning story that explores the evolution of modern nursing—including the grisly realities of nineteenth-century medicine—as seen through the eyes of an intriguing and dynamic heroine.

Amanda Skenandore is the award-winning author of three historical novels, The Second Life of Mirielle West, The Undertaker’s Assistant, and Between Earth & Sky. She’s also a registered nurse and certified infection preventionist. When she’s not writing or chasing germs, Amanda spends her time curled up on the couch with a book and cup of tea or tending to her many houseplants. She lives in Las Vegas with her husband Steven and their pet turtle Lenore.

This read grabbed me from the first page to the end, I really couldn’t put it down!
This Una Kelly’s story, a young woman who’s shoes I was soon walking in. Survival, yes, and no I don’t agree with how and what she did to just eat and sleep each day, but she had nothing.
We are quickly shown that this grifter has a heart, she inwardly yells at herself, but does risk everything to help another. Sometimes helping her friends, does lead to trouble, and in the end manages to change her life forever.
This is the 1880’s in NYC, and our girl now wants to be a nurse, or she wants meals and a bed, and a little safety. This is a pivoting time in medical care, and we meet the old practices head on, and hope for survival!
For a girl who grew up on the streets, she is a smart cookie, and see how she is able to wiggle her way into the new program at Bellevue Hospital, and the new nursing program! What she doesn’t expect is a new friend, and a possible romance, along with a serial killer.
This was a read that I never wanted to end, and make sure you read the Author’s notes at the end!
I received this book through Edelweiss and the Publisher Kensington, and was not required to give a positive review.
at June 28, 2022