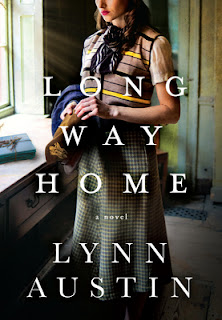 In this gripping portrait of war and its aftermath from bestselling author Lynn Austin, a young woman searches for the truth her childhood friend won’t discuss after returning from World War II, revealing a story of courage, friendship, and faith.

Peggy Serrano couldn’t wait for her best friend to come home from the war. But the Jimmy Barnett who returns is much different from the Jimmy who left, changed so drastically by his experience as a medic in Europe that he can barely function. When he attempts the unthinkable, his parents check him into the VA hospital. Peggy determines to help the Barnetts unravel what might have happened to send their son over the edge. She starts by contacting Jimmy’s war buddies, trying to identify the mysterious woman in the photo they find in Jimmy’s belongings.

Seven years earlier, sensing the rising tide against her people, Gisela Wolff and her family flee Germany aboard the passenger ship St. Louis, bound for Havana, Cuba. Gisela meets Sam Shapiro on board and the two fall quickly in love. But the ship is denied safe harbor and sent back to Europe. Thus begins Gisela’s perilous journey of exile and survival, made possible only by the kindness and courage of a series of strangers she meets along the way, including one man who will change the course of her life.
Amazon
About The Author

For many years, Lynn Austin nurtured a desire to write but frequent travels and the demands of her growing family postponed her career. When her husband's work took Lynn to Bogota, Colombia, for two years, she used the B.A. she'd earned at Hope College and Southern Connecticut State University to work as a teacher. After returning to the U.S., the Austins moved to Anderson, Indiana, Thunder Bay, Ontario, and later to Winnipeg, Manitoba.

Extended family is also very important to Austin, and it was a lively discussion between Lynn, her mother, grandmother, and daughter concerning the change in women's roles through the generations that sparked the inspiration for her novel Eve's Daughters.

Along with reading, two of Lynn's lifelong passions are history and archaeology. While researching her Biblical fiction series, Chronicles of the Kings, these two interests led her to pursue studies in Biblical Backgrounds and Archaeology through Southwestern Theological Seminary. She and her son traveled to Israel during the summer of 1989 to take part in an archaeological dig at the ancient city of Timnah. This experience contributed to the inspiration for her novel Wings of Refuge.

Lynn resigned from teaching to write full-time in 1992. Since then she has published 27 novels. Eight of her historical novels have won Christy Awards for excellence in Christian Fiction: Hidden Places (2001), Candle in the Darkness (2002), Fire by Night (2003), A Proper Pursuit (2007), Until We Reach Home (2008), Though Waters Roar (2009) While We're Far Apart (2010), and Wonderland Creek (2011). She was inducted into the Christy Award Hall of Fame in 2013. Fire by Night was also one of only five inspirational fiction books chosen by Library Journal for their top picks of 2003, and All She Ever Wanted was chosen as one of the five inspirational top picks of 2005. Lynn's novel Hidden Places has been made into a movie for the Hallmark Channel, starring actress Shirley Jones. Ms Jones received a 2006 Emmy Award nomination for her portrayal of Aunt Batty in the film.

Lynn Austin has gifted us with another wonderful read. This is a WWII novel and we follow a Jewish girl Gisela Wolff, we meet as a teen, but follow to adulthood, amid the madness and evil that took hold in Germany and spread its tentacles. The Holocaust, which we must never forget, the hate for a group of people, that soon included more and more groups of people, and the atrocities that were committed.
I loved how the title resonates all the way through this read, and it becomes more and more poigent all the way to the end.
We also walk in Peggy Serano's shoes, and young woman who wears her heart on her sleeve, and will go to any length to help those she loves. What do these two women have in common, besides residing in a world full of hate, well, a young man named Jimmy Barnett, and we live his time in this madness through the eyes of these women.
With tough subjects and horrible decisions, condemning some to death, and then the aftermath as most of the atrocities come to light and how to deal with them. Not a lighthearted story, but one we should never forget!
I received this book through Net Galley and the Publisher Tyndale, and was not required to give a positive review.
at June 21, 2022