A Season of Change (Amish Inn #3) by Beth Wiseman 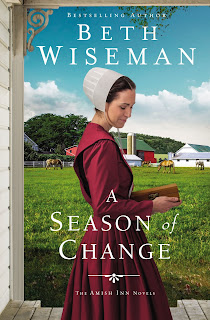 Finding peace means letting go of the past—and embracing the change that is to come.

Sisters Esther and Lizzie have a new employee, Rose Petersheim, to help them tend to The Peony Inn. But their old matchmaking ways have stayed the same. The sisters focus their efforts on the lovely twenty-five-year-old Rose. Though Rose is witty and outspoken, her nervous chattering makes her the best match for someone calm and good at listening. Someone like Benjamin—the handsome handyman who recently moved to town.

But when Esther receives an anonymous love letter and flowers, Rose’s love life is no longer the only one capturing the sisters’ attention. As they sleuth around searching for Esther’s secret admirer, they uncover that their grumpy renter, Gus, has a secret of his own that could bring about a difficult change in all their lives. And their continued meddling in Rose’s affairs reveals she, too, is hiding something—an old wound that could threaten her future happiness.

As Rose, Lizzie, Esther, and Gus struggle to release the weight of their pasts, they discover that although people are complicated, love doesn’t need to be.

This charming third installment of the Amish Inn series from bestselling author Beth Wiseman is a picture of loss and healing in which forgiveness will prove to be the greatest act of love. 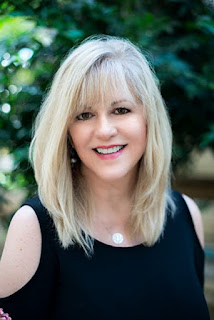 Beth Wiseman is the best-selling author of the Daughters of the Promise series and the Land of Canaan series. Having sold two million books, her novels have held spots on the ECPA (Evangelical Christian Publishers Association) Bestseller List and the CBA (Christian Book Association) Bestseller List. She was the recipient of the prestigious Carol Award in 2011 and 2013. She is a three-time winner of the Inspirational Readers Choice Award, and an INSPY Award winner. In 2013 she took home the coveted Holt Medallion. Her first book in the Land of Canaan series—Seek Me With All Your Heart—was selected as the 2011 Women of Faith Book of the Year. Beth is contracted with HarperCollins Christian Publishing into the year 2018, and she has published thirteen novels and thirteen novellas to date.

As a former newspaper reporter, Beth was honored by her peers with eleven journalism awards, including first place news writing for The Texas Press Association. She has been a humor columnist for The 1960 Sun in Houston and published articles in various publications. However, writing novels is where her heart is. She left her job as a journalist in 2008 to write novels fulltime.

Beth has a deep affection for the Amish and their simpler way of life, and while she plans to continue writing Amish love stories, she is also branching out into other areas. Her first non-Amish, contemporary—Need You Now—released in April 2012 and landed on the CBA Bestseller List. She enjoyed writing the story based in a town near where she lives, and she chose another small Texas town for her next non-Amish contemporary—The House that Love Built—which is based in Smithville, the same quaint town where movies such as Hope Floats and Tree of Life were filmed. Beth continued to spread her wings when she released The Promise in October 2014. Inspired by actual events, The Promise follows Beth’s characters all the way to Pakistan. Beth was involved in the real-life rescue when her friend was held captive in Pakistan. Beth is currently working on book #2 in her new Amish Secrets series, tentatively titled Jacob’s Ladder. Book #1—Her Brother’s Keeper—recently released and was chosen as a Top Pick by RT Reviews Magazine.

Beth and her husband are empty nesters enjoying the country life in Texas. When she’s not writing, she loves to travel, paint, and enjoy time with friends and family. You can find Beth at Fans of Beth Wiseman on Facebook where she interacts with readers and on Twitter at https://twitter.com/bethwiseman.

This is my third visit at the Peony Inn, and I love being reunited with old friends. This book does again focus on the sister's Lizzie and Esther, and Rose, aka Rose Petal, our resident helper, cook, and constant talker.

With this installment we are given some sweet, not smooth sailing, romance, a mystery of a secret admirer, and the loss of a loved one.

There are some chuckles, and some heart wrenching revelations, and then finding a way to forgiveness, and as with the other books in this series, I was quickly page turning for answers!

I received this book through Net Galley and the Publisher Zondervan, and was not required to give a positive review.
at October 05, 2021