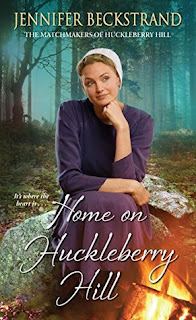 Huckleberry Hill, Wisconsin’s irrepressible eighty-something matchmakers Anna and Felty Helmuth are at it again. And this time they’re willing to rough it to get the job done...

Mary Anne Neuenschwander knows she should be content with what Gotte has given her. She has a comfortable house, a fruitful farm, and a good, steady husband. But after nearly six years of marriage, she still longs for a baby. Yet her husband, Jethro, seems to care more about fishing than about his wife. Unable to bear Jethro’s indifference, Mary Anne moves into a tent in the woods where he won’t have to be bothered. But when her mammi and dawdi find out what she’s done, they’ll stop at nothing—including a little camping trip of their own — to help save their granddaughter’s marriage...

Jethro’s greatest blessing is his beloved wife, Mary Anne. Nothing else in his life has turned out anywhere near the way he expected. Rather than burden Mary Anne with his disappointment, he shields her by spending less and less time at home and more time on the river. But when he finds that she’s moved out, he’s shocked. What will people think? What is Mary Anne thinking? And what clever plans are her grandparents hatching? The Honeybee Sisters, has created a lot of romantic buzz. Sweet as Honey received a starred review from Publisher’s Weekly and Sweet as Honey and A Bee in her Bonnet were both awarded Top Picks from RT Book Reviews.

Jennifer has always been drawn to the strong faith and the enduring family ties of the Plain people and loves writing about the antics of Anna and Felty Helmuth and the Honeybee sisters’ aendi Bitsy. Jennifer has a degree in mathematics and a passion for Jane Austen and Shakespeare. She and her husband have been married for thirty-three years, and she has six children and six adorable grandchildren, whom she spoils rotten.

I was dying to read this book, being a fan of Annie and Felty, and it sure didn’t disappoint.
The author has a character, one of our Amish grandparent’s granddaughters, and this one is different from their usual matchmaking. Annie does present some pot holders, and her wonderful, tongue in cheek, cooking, and this time it is over an open fire.
At times, we all feel taken for granted but their granddaughter, Mary Anne, has had it, and is ready to leave her husband. We end up camping and wait for the experiences and chuckles you are about to be gifted.
In the end will our favorite octogenarians be able to keep sleeping in a tent, and will their granddaughter divorce her husband, unheard of, or will it all work out, but how?