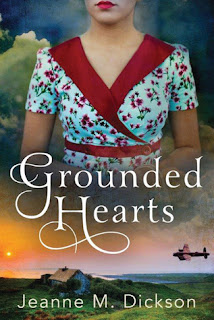 In the midst of World War II, Ireland has declared herself neutral. Troops found on Irish soil must be reported and interned, no matter which side they are fighting for. When midwife Nan O’Neil finds a wounded young Canadian pilot at her door, she knows she’s taking a huge risk by letting him in. Not only is she a widow living alone, but if caught harboring a combatant, she’ll face imprisonment.

Still, something compels Nan to take in “flyboy” Dutch Whitney, an RAF pilot whose bomber has just crashed over County Clare. While she tends to his wounds and gives him a secret place of refuge, the two begin to form a mutual affection—and an unbreakable bond.

But Nan has another secret, one that has racked her with guilt since her husband’s death and made her question ever loving again. As Nan and Dutch plan his escape, can he help restore her faith?

Join Jeanne in celebrating the release of her new book by entering to win the Celtic Knots Giveaway!

Enter today by clicking the icon below, but hurry! The giveaway ends on July 31. The winner will be announced August 1 on the Litfuse blog.

Jeanne M. Dickson was born into an Irish American family, the only girl surrounded by four brothers. She credits her mother, her aunts, and her grandmother with her love of storytelling. Perfecting her craft, she attends many writer’s conferences and over the years, she has won and finaled in numerous RWA romance writing awards including the Daphne du Maurier Award, the Maggie Award, The Molly, The Tara, and she was the overall contest winner of Launching A Star. Today she lives in Coastal San Diego with her fabulous husband, her two wonderful girls, and a dozen disobedient rose bushes.
Find out more about Jeanne M. at http://www.jeannemdickson.com.

loved this story, I loved roaming the hills of Ireland, and the concept presented by the author is one that peeked my interest immediately!
Even though I’ve never been there I have always been proud of my Irish heritage, and I knew that Ireland was neutral during the war, but I never knew that they had interment camps, this book is full of interesting and fun facts, along with Irish Gypsies, the Tinkers.
We have a RAF airman, Dutch, shot down with his crew in Southern Ireland, and he ends up at a mid-wife’s door, Nan. What happens from here with warm your heart, and cringe at Finn, and the strong women from doctors to mechanics, and they are there for their own.
Dealing with their demons both Nan and Dutch are survivors, and we see them bond, but can anything come from their relationship, he is actually now a wanted man and she is harboring a fugitive.
I was sure surprised at the turn of events here, and sure wish I could go back, a real page-turner and a book that is going to linger with you.
I received this book through Lit Fuse Publicity Book Tours, and was not required to give a positive review.