The Forgotten Recipe by Amy Clipston 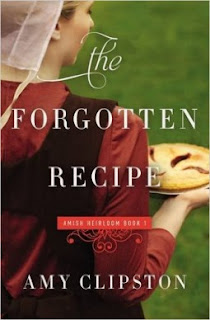 After losing her fiancé in a tragic accident, Veronica Fisher finds solace in the old recipes stored in her mother’s hope chest—and in a special visitor who comes to her bake stand to purchase her old-fashioned raspberry pies.


Veronica Fisher knows how lucky she is to be marrying her best friend. Seth Lapp is kind, hardworking, and handsome—but most importantly, he loves Veronica.


When an accident on the job steals Seth away from her, a heartbroken Veronica is certain she will never love—or be loved—again. Yet when she discovers a batch of forgotten recipes and opens a bake stand to sell her Mammi’s raspberry pies, Veronica picks up a regular customer who gives her heart pause.


Jason Huyard was with Seth when he lost his life—a memory that haunts him still. So when he seeks out the grieving fiancée to convey his condolences, the last thing he expects—or wants—is to fall in love. Nonetheless, Jason soon finds himself visiting Veronica’s bake stand every week . . . and it’s for more than the raspberry pies.


Now, as Veronica’s heart thaws, Jason can’t bring himself to tell her he was there when Seth died. Can he ever reveal where he was on the day her life derailed? Or will his secret rob them of the second chance at love they both want?

Amy Clipston has been writing for as long as she can remember. Her fiction writing “career” began in elementary school when she and a close friend wrote and shared silly stories. She has a degree in communications from Virginia Wesleyan College and is a member of the Authors Guild, American Christian Fiction Writers, and Romance Writers of America. She is the author of the bestselling Kauffman Amish Bakery series and Hearts of the Lancaster Grand Hotel series with HarperCollins Christian Publishing. Amy works full-time for the City of Charlotte, NC, and lives in North Carolina with her husband, two sons, mother, and four spoiled rotten cats.

The forgotten recipe is about a newly found old recipe that Veronica’s grandmother used to make. This recipe turns out to be a great hit with everyone, and is the catalyst to bringing the main two characters together.
Jason Huyard’s mother hears about this wonderful pie and wants her sons to get her some from a sweet Amish girl Veronica Fisher, and thus the story of a new relationship begins. Not an easy path, this is one that has a shared grief of loosing a future husband and a best friend. Both having nightmares of how they maybe could have saved Seth’s life, even though they both know that it was his time and God called him home.
The path is not going to be easy to place these two together, there is another girl who seems to be very interested in Jason. There are also some deep secrets that are being withheld and then some almost insurmountable times to have told the truth that seem to have been missed.
This is a quick and entertaining read, and you really won’t know until the end what will happen, and I felt I was left with a cliffhanger when another secret is partially revealed, but not all the answers.
I received this book through Net Galley and the Publisher Zondervan, and was not required to give a positive review.