At Love's Bidding by Regina Jennings

She sells priceless antiques. He sells livestock by the pound. Is he really the man to make a bid for her heart?
After helping her grandfather at their Boston auction house, Miranda Wimplegate discovers she’s accidentally sold a powerful family’s prized portrait to an anonymous bidder. Desperate to appease the people who could ruin them forever, they track it to the Missouri Ozarks and make an outlandish offer to buy the local auction house and all its holdings before the painting can move again.
Upon crossing the country, however, Miranda and her grandfather discover their new auction house doesn’t deal in fine antiques, but in livestock. And its frustratingly handsome manager, Wyatt Ballentine, is annoyed to discover his fussy new bosses don’t know a thing about the business he’s single-handedly kept afloat. Faced with more heads of cattle than they can count–but no mysterious painting–Miranda and Wyatt form an unlikely but charged partnership to try and prevent a bad situation from getting worse. 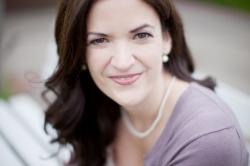 Regina Jennings is a graduate of Oklahoma Baptist University with a degree in English and a history minor. She is the author of “A Most Inconvenient Marriage,” “Sixty Acres and a Bride,” and “Caught in the Middle,” and contributed a novella to “A Match Made in Texas.” Regina has worked at the Mustang News and First Baptist Church of Mustang, along with time at the Oklahoma National Stockyards and various livestock shows. She now lives outside Oklahoma City, Oklahoma, with her husband and four children.
Find out more about Regina at http://www.reginajennings.com/.

Paths are about to cross when the Wimplegate’s Auction House accidently sells a family heirloom that was not supposed to sold as part of the LeBlanc families belongings. Actually the grandfather Wimplegate is aging, and we meet head on the loosing of a love one while they are still alive with dementia.
Miranda Wimplegate decides to help her grandfather track down the lost portrait and they head to the Missouri Ozarks, and try and save their business with the recovery. You will find several chuckles and laughs as they see the new auction house they bought, and then some of the priceless antiques, not, that grandpa buys.
We meet Wyatt and again a chuckle as they try and dress him as if he is in Boston Ma, where their Auction House is. We do travel the beautiful countryside, and wonder if the two opposites in Miranda and Wyatt could possibly attract.
There is danger, and then there is not fitting in with your family, and the journey to find your roots.
It took me awhile to get through this book, and the epilogue at the end didn’t seem to give more information about the story I had just read, which was a bit of disappointment.

I received this book through Litfuse Publicity Book tours, and was not required to give a positive review.
at December 10, 2015