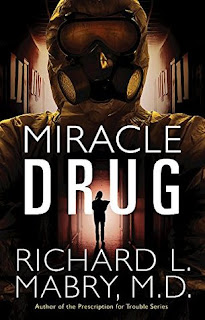 The infection wasn’t supposed to happen, but it did. The treatment was supposed to take care of it, but it didn’t. Then Dr. Josh Pearson discovers why—his patients, including the former President of the United States, have been dosed with a different strain of the original virus, one that is universally fatal. The only chance for survival is treatment with an experimental drug, but the manufacturer might already have discarded its supply.

As if treating the President of the United States isn’t stressful enough, the situation goes from bad to worse when Rachel Moore, a nurse Josh is falling in love with, falls ill. With the nation’s eyes on him, Josh must pull off a miracle to save a man who holds a good deal of power and the woman who holds his heart.

A retired physician, Dr. Richard Mabry is the author of seven critically acclaimed novels of medical suspense. His previous works have been finalists for the Carol Award and Romantic Times Reader’s Choice Award, and have won the Selah Award. He is a past Vice-President of American Christian Fiction Writers and a member of the International Thriller Writers. He and his wife live in North Texas.


Learn more and purchase a copy at Richard’s website.

I just finished Dr. Mabry’s Miracle Drug and you need to know that not all is revealed until the last page is turned.
How do you choose who lives? The man you have committed to save, a former President and World leader, or the woman who has finally reopened the door to your heart and you finally admit you love.
How the treachery and deceiving evolves throughout the book, and you never know who or whom you can trust and maybe they were also involved. What it all comes down to is the almighty dollar, and what length these people will go to achieve their goals.
The author tells you at the end that there is no such disease or drug, but could there be? Could people actually ransom a curing drug and if you don’t have a large sum of money you die?
I loved the faith of some of these characters, how willing would you be to give your supply of a drug that would save your life to another? Yet, we have a nurse, who knows the Lord and is willing to let the former President have her supply, she knows where she will be going when she dies.
Come and enjoy an unforgettable read, you won’t be able to put it down and it will have you riveted to each page as you discover who to trust and where you went wrong.
I received this book through Litfuse Publicity Book tours and was not required to give a positive review.