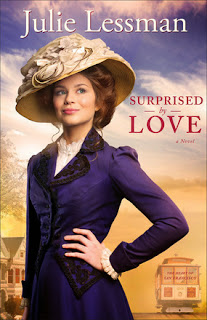 Shy and unattractive as a child, Megan McClare has always been teased by her classmates. But when she returns home from her senior year in Paris, the wallflower has suddenly blossomed into a beauty. With ambitions to become a lawyer or doctor, Megan accepts an internship at the district attorney's office only to discover that she will be working with Devin Caldwell, a boy who mercilessly mocked her at school--and with whom she was hopelessly enamored. She turns to her dear friend Bram Hughes for support and advice. But Bram's vision is clouded by his sudden unwelcome attraction to a girl he had always thought of as a kid sister. He advises forgiveness, but can he forgive himself for pushing the woman he loves into the arms of another man?

Fan favorite Julie Lessman draws a romantic triangle that will have readers in a tizzy in this glittering Gilded Age tale of transforming love.

Julie Lessman is an award-winning author whose tagline of “Passion With a Purpose” underscores her intense passion for both God and romance. Winner of the 2009 ACFW Debut Author of the Year and Holt Medallion Awards of Merit for Best First Book and Long Inspirational, Julie is also the recipient of 14 Romance Writers of America awards and was voted by readers as “Borders Best of 2009 So Far: Your Favorite Fiction.”
Chosen as the #1 Romance Fiction Author of the Year in the Family Fiction magazine 2012 and 2011 Readers Choice Awards, Julie was also awarded #1 Historical Fiction Author of the Year in that same poll and #3 Author of the Year, #4 Novel of the Year and #3 Series of the year. She resides in Missouri with her husband, daughter, son, daughter-in-law and granddaughter and is the author of “The Daughters of Boston” series—A Passion Most Pure, A Passion Redeemed, and A Passion Denied. Book 1 in her “Winds of Change” series A Hope Undaunted ranked #5 on Booklist’s Top 10 Inspirational Fiction for 2010.

We are back in the early 1900’s San Francisco, and with the beloved McClare family. With anticipation the family is waiting the arrival of Ms Megan as she returns from Paris, France. What they aren’t expecting is the, not unkindly statement, ugly duckling that has become a swan.
This is Megan Maureen McClare’s story, but we are reunited with the whole family, and enjoying our time with them. So good to be back and get updates on everyone. We are still having the love, not hate, but hold at an arm’s length relationship between Cait and Blake, and to the family chagrin we are heading for more of the same between these two.
Can’t you just picture the surprise from people who have known Meg her whole life? Even those who have made fun of her, four eyes, etc., what a rude awakening they are in for. One of them who tormented her terribly is now quite smitten with her. Can anything come from that relationship, and our darling Meg will be able to let go of all the hurts put upon her by this individual. Would love to have seen the look on his face the first time he sees her.
Then we have Blake and have always loved how he has been there for Meg, but as a child, not as a blossomed woman. Being older than her, he tries to put his feeling out of his mind, and after all he owes everything to his parents, for his youthful wrong doings.
Walk along with these dear people as the struggle to walk on the path that God is leading them, rather than their own stubborn choices. Something we all struggle with, and sure hope that forgiveness can happen for all.
I would love more to this story, but most everything is wrapped up by the end of this book, which of course, you could do a read alone, it is that good, but you would be giving up a lot by not reading the previous two books. Enjoy!!

I received this book through Revell’s Book Blogger’s Program, and was not required to give a positive review.
at November 12, 2014