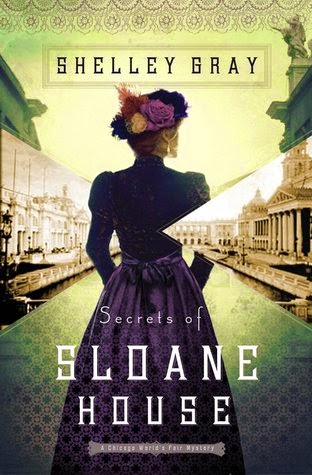 One woman's search for the truth of her sister's disappearance leads her to deceit and danger in 1893 Chicago.

Rosalind Perry has left her family's rural farm in Wisconsin to work as a housemaid at Sloane House, one of the most elegant mansions in Gilded Age Chicago. However, Rosalind is not there just to earn a living and support her family-she's at Sloane House determined to discover the truth about her sister's mysterious disappearance.

Reid Armstrong is the handsome heir to a silver fortune. However, his family is on the periphery of Chicago's elite because their wealth comes from "new money" obtained from successful mining. Marriage to Veronica Sloane would secure his family's position in society-the lifelong dream of his ailing father.

When Reid begins to realize that Rosalind's life may be in danger, he stops thinking of marriage prospects and concentrates on helping Rosalind. Dark things are afoot in Chicago and, he fears, in Sloane House. If he's not vigilant, Rosalind could pay the price.

Set against the backdrop of Chicago's Gilded Age and the 1893 World's Fair, Secrets of Sloane House takes us on a whirlwind journey of romance and mystery.

I grew up in Houston, Texas, went to Colorado for college, and after living in Arizona, Dallas, and Denver, we moved to southern Ohio about ten years ago.
I’ve always thought of myself as a very hard worker, but not ‘great’ at anything. I’ve obtained a bachelor’s and master’s degree…but I never was a gifted student. I took years of ballet and dance, but I never was anywhere near the star of any recital. I love to cook, but I’m certainly not close to being gourmet…and finally I love to write books, but I’ve certainly read far better authors.
Maybe you are a little bit like me. I’ve been married for almost twenty years and have raised two kids. I try to exercise but really should put on my tennis shoes a whole lot more. I’m not a great housekeeper, I hate to drive in the snow, and I don’t think I’ve ever won a Monopoly game. However, I am the best wife and mother I know how to be.
Isn’t it wonderful to know that in God’s eyes that is okay? That from His point of view, we are all exceptional? I treasure that knowledge and am always so thankful for my faith. His faith in me makes me stand a little straighter, smile a little bit more, and be so very grateful for every gift He’s given me.
I started writing about the Amish because their way of life appealed to me. I wanted to write stories about regular. likeable people in extraordinary situations-and who just happened to be Amish.
Getting the opportunity to write Inspirational novels is truly gratifying. With every book, I feel my faith grows stronger. And that makes me feel very special indeed.

Another great book from Shelley Gray, and again the setting is in Chicago at the time of the 1893 World’s Fair. How I loved being back and am becoming familiar with the layout and the buildings here, thanks to Shelley.
This book is a mystery that left a family with a hole in their hearts. A missing member, a sister, a daughter, where could she be? To find answers, a younger sister Rosalind decides she has to leave her Wisconsin farm home, and safety, and go to where her sister was last seen.
She takes off and enters a very unfamiliar world, and becomes a servant in the Sloane House, as her sister had before her. She is incognito, and looking for clues, where could her sister be? What a scary world she seems to have entered, having lived a rather sheltered life. Everything is so new, but she has to remember her station in life, if she is to exceed. Someone must know something?
We have arrived at a time when being in high society meant everything to the elite and here we also experience the Gilded Age Chicago. We meet some people who feel everyone accept them are subservient people; they have a protruding silver spoon in their mouths. Are they above the law? You feel that perhaps they are! There are others who appear quite the opposite and you have the feeling that there is some hope. I had the feeling that there were some who were walking with Satan, and other who loved the Lord.
Will Rosalind be able to stay on the right path, or will the evil that seems to pervade in Sloan House consume her? Don’t miss this one, a page-turner from beginning to end.

I received this book through Book Look Bloggers, and was not required to give a positive review.